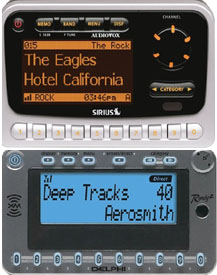 America’s two satellite radio companies are convinced that tens of millions of Americans will pay for radio if it gives them more than they now get for nothing.

XM and Sirius satellite radio still have major obstacles, starting with the fact most people don’t know they exist. They also need to make potential customers feel comfortable with a different, higher-tech radio.

But soon enough, said longtime media analyst Robert Unmacht, most people will know about satellite radio and consider it no more intimidating than cable TV. The radios themselves will be affordable enough so the biggest issue will be whether listeners want the content.

And how enticing is it?

"On satellite, I count 26 music formats I like," said Unmacht. "On regular radio, I count five."

Or to put it another way: Anyone who had satellite radio now could hear country music, popular standards, big bands, ’50s oldies, and dozens of shades of rock, dance, classical and Latin music heard only in small blips on free radio.

Satellite is also starting to roll out star power.

Sirius gets Howard Stern by January 2006 and carries all National Football League games.

Each year satellite programming will get a little better, the radios cheaper, the technology flashier. So it’s a personal judgment call whether, and when, to jump in.

"Satellite is still a work in progress," said Unmacht. "The Sirius channels with real hosts, like Meg Griffin’s, are terrific. But some just play music with an occasional joke over the intros. That’s not the way you make radio a companion."

XM’s ’50s channel has a great range of music, from deep rockabilly and blues to the hits. "Hank’s Place," XM’s classic country channel, has a much narrower playlist.

Some channels sound just like "regular radio," with jocks. Others are jukeboxes. Both services are commercial-free on music channels, though not elsewhere.

Many of the early satellite subscribers, it turns out, are in their 40s and 50s, which Unmacht said isn’t surprising.

"As terrestrial radio goes after younger listeners," he said, "those are the age groups it is increasingly disenfranchising."

That group can also afford another electronic toy. Satellite costs $9.99 a month for XM and $12.95 for Sirius, and the radio itself can run $100-$500. Both Sirius and XM now offer boom boxes and XM is about to roll out the first Walkman-style portable, which will run $350. That will come down.

XM and Sirius figured their primary initial market would be vehicles, so the in-home and portable technology is still being worked out. If you’re deep inside a high-rise building, you may not get the signal unless you can snake the antenna to a roof or window. Both companies downplay the issue but admit it’s a factor.

In the long term, said Unmacht, the technology will work itself out, just as he thinks the radio business will sort itself out.

Terrestrial radio will continue to do fine, he said, because it can offer a local, immediate presence that satellite cannot.

Sounding out the differences between XM & Sirius:

XM: $9.99 a month (premium channels including Opie & Anthony are extra)