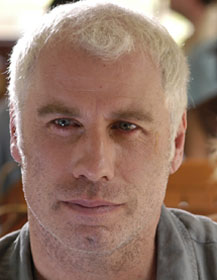 When talking about low-budget, independent movies, the name John Travolta might not immediately come to mind. However, the star of such big-budget studio films as Ladder 49, Face/Off and Get Shorty has recently turned to the world of independent cinema. In what could be one of his most emotional roles to date, Travolta plays the title character in the New Orleans-based drama, A Love Song for Bobby Long, currently in theaters.

The film begins when Pursy (Scarlett Johansson, in a Golden Globe-nominated role) finds out that her mother has passed away, and then decides to return to a home she hasn’t seen in years. Upon making the trip to a run-down section of New Orleans, she finds that her home is now occupied by two of her mom’s friends, Bobby and Lawson (Gabriel Macht).

Bobby is a former literature professor who now spends his time drinking and making obscure literary references, and Lawson is his former student. The two don’t take kindly to Pursy when she comes back and tries to live with them, but she elects to stay rather than go back to the life she’s trying to leave behind. The relationships that develop out of this ugly scenario become the heart of the film.

As a big movie star on a smaller set, one might expect Travolta to have ridiculous demands or to distance himself from the rest of the crew. Macht says that this was not the case.

"When John comes to the set, he wants everyone to feel like they’re part of the whole project. I’m surprised he kept that energy going."

Macht (The Recruit) says it was a treat working with one of his childhood idols. He says it was made easier by the fact that he had seen Travolta in so many other films.

"I’ve had the benefit of watching him for 20 years," he says. "When I was trying to create a history with him, it was great because I had two hours here, two hours there throughout my whole life."

The veteran Travolta and relative newcomer Macht worked with first-time director Shainee Gabel on Bobby Long. Gabel agreed that Travolta was an inviting presence on the set.

"John Travolta can and has the right to be the 800-pound gorilla, and he wasn’t at all," she says. "It was all very equal. I learned an enormous amount from him."

Gabel and her crew had to work quickly on this film once the project was green-lit. After five years in development, they immediately had less than a month for pre-production. The shoot, including rehearsal time, was a short 30 days.

"The hardest thing about making the film was the time," says Gabel. "It [was] so precious, so limited."

Shooting the film in New Orleans rather than on a set took the process to another level. Although working in the heat was tough, it seemed to give the film an added dimension. A former resident of the city, Gabel believes that overall, New Orleans hasn’t been depicted well in film history.

"The beauty of its decay is very intriguing," she says. "The Bobby Long character became New Orleans for me."

To add to the gritty feel of the film, Travolta dyed his hair white for the part. He says he was happy to see himself like this on screen.

"There were moments when Shainee wanted me to look a little better than I wanted," he says. "I was relieved to see myself older."

In his next role, Travolta moves from this intensely sad character to the slick Chili Palmer in Be Cool, the follow-up to Get Shorty. At this point in his career, Travolta says he knew the switch to the low-budget Bobby Long was the right move due to strong relationship he had with director Shainee Gabel.

"She had a vision, she had a script, and I trusted both," he says. "And she trusted me."

A Love Song for Bobby Long is currently in theaters.