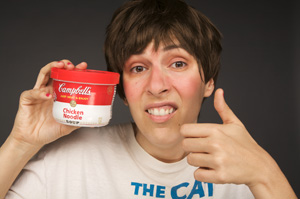 For some reason the name for each of the Groundlings’ shows I’ve seen recently have nothing to do with the skits. First it was “Swimsuit Edition,” with no bikinis in sight, and now “Key Party,” which refers to a party where married couples put their car keys in a hat and whoever’s keys are picked, you go home with. But I digress.

Though my fave Groundling, Melissa McCarthy, was missing from this edition, the other comedic actors more than made up for her absence. Michaela Watkins as Arianna Huffington in “Huffy Hour” was hilarious and dead-on as she disinterestedly interviewed Hillary Clinton (an overly eager and energized Stephanie Courtney). Edi Patterson was awkwardly goofy in “Campbell’s,” and Ariane Price was pathetically humorous in “Spanks,” while Annie Sertich made me laugh hardest as a nerdy secretary-gone-wild in “Hail Gail.”