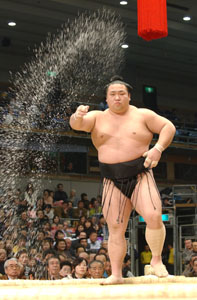 Sumo wrestling is huge in Japan. The athletes are treated and thought of as gods. I was once told that they have assistants who help them dress and perform other personal functions. Yet to my knowledge, this sport is not as revered in America.

Enter the Grand Sumo Tournament, which marks the return of Japanese professional sumo wrestling to Los Angeles for the first time since 1981. According to their site, all top 40 Makunouchi ranked wrestlers are expected to participate, as are Yokozuna (Grand Champions) Asashoryu and Hakuho.

What’s so amazing about sumo wrestling, almost to the point of being slightly terrifying, is watching these big, often gigantic, men grapple with each other, striving to push each other out of the inner circle, or dohyo, or throwing them to the ground inside of it.

No-nos are striking with fists, hair pulling, eye gouging, choking, kicking in the stomach or chest and seizing the part of the band covering the vital organs. Also, because there are no weight limits or classifications, a wrestler may end up scrapping with someone twice their size.

The most fascinating part, however, is the ritualistic, spiritual, almost religious nature of the bouts. You somehow feel as if you’re witnessing an event more meaningful than a sport (although some people do consider sports as meaningful as religion). Bolstering this point, the site explains that the first matches were “a form of ritual dedicated to the gods with prayers for a bountiful harvest.”

So soak up a little religion in your life – or take pops for a surprise Father’s Day adventure – and see sumo wrestling in Los Angeles.