Pitch Perfect: The A Cappella Subculture 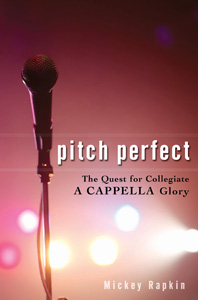 "A cappella has become a go-to pop culture joke."

Mickey Rapkin, the author of Pitch Perfect: The Quest for Collegiate A Cappella Glory, analyzes in the intro how a cappella has fallen, in society’s eyes, from a revered Ivy League institution to a joke. He cites examples from the shows “The Office” and “30 Rock” as proof of this degeneration, which has led to many stars denying their a cappella roots.

But, beyond the cheap-shot jokes that pop culture throws out at its expense, a cappella has a long history, making it more of a tradition and a brotherhood/sisterhood than an after-school club.

“I always felt there was a funny, heartwarming story within a cappella,” states Rapkin.

“A cappella groups have largely the same experience,” Rapkin concludes. “They live and die in the same way.”

Rapkin follows several of these simultaneously unique and similar groups throughout the 2006-2007 season leading up to the annual International Championship of Collegiate A Cappella. The book primarily focuses on three groups: the Tufts Beelzebubs, the University of Oregon Divisi and the University of Virginia Hullabahoos.

Rapkin plays the role of an observer, making sure that he’s just relaying the events and dialogue without adding his own opinion.

“I wanted to keep myself out of the story,” he explains.

Even though Rapkin is simply giving us a glance into these singers’ lives without adding his own commentary, the groups go through enough elation, heartbreak and drama for a show on the CW. Contrary to the public’s perception of a cappella groups, they are very much like a fraternity: they party, they get rowdy, they’re well-known on campus and they get laid. But, they also rise above it.

“The girls [in Divisi] were really inspirational,” gushes Rapkin. “For them, the story was really about the unity – they were kind of a band of girls who supported each other.”

While some celebrities may want to remain mum about their involvement in a cappella (and others even go so far as to deny it), a cappella ultimately transcends reputation.

“It’s just about having fun and enjoying every moment of it,” asserts Rapkin. “Unless you’re a big musician, you’ll never be able to sell out a concert for 2,000 people or record in a studio (outside of a cappella.)”

It’s one of those things that only a handful of college students on each campus can experience, and Rapkin offers us a view into this fascinating subculture of college life.

Pitch Perfect: The Quest for Collegiate A Cappella Glory will be available May 29.