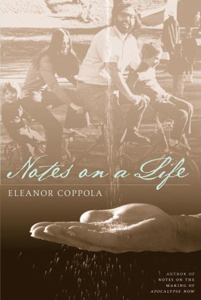 Most famous for being the wife of Francis Ford Coppola (The Godfather) and the mother of Sofia Coppola (Lost in Translation), Eleanor Coppola struggles to find her own place among the successful and creative family she inhabits (Others in the clan are Nic Cage, Talia Shire and Jason Schwartzman.)

Having produced some of her own work to great acclaim, most notably, Hearts of Darkness: A Filmmaker’s Apocalypse, a documentary following her husband’s production, Apocalypse Now, Coppola still finds herself at loose ends as she looks back on the first half of her life. Having raised three children and as the rock of the family, Coppola struggles with her identity as an artist, wondering if she has pushed herself enough or created enough of a coherent body of work to be proud of.

Filled with chatty anecdotes about Hollywood and sadness over the death of her son Gio, Coppola provides a clear portrait of a marriage and family.

Notes on a Life is currently available.