Angel of Music: Emmy Rossum Dazzles the Crowd The Phantom of the Opera 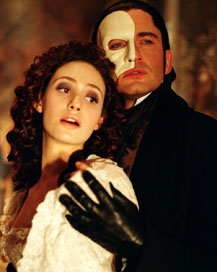 Why did Andrew Lloyd Webber decide that the world needs a movie version of "The Phantom of the Opera"? Was he trying to cash in on the recent resurgence of movie musical mania spearheaded by the success of Moulin Rouge and Chicago? Certainly anybody interested in the "Phantom" musical has had more than enough opportunities to see the show since its inception, and anybody with even a passing interest in musical theater knows Webber’s show by heart, right?

Not Emmy Rossum, the 18-year-old actress who joined the New York Metropolitan Opera at age 7. She’d never seen "Phantom" in her life.

"I still haven’t," she admits. "This is what Andrew Lloyd Webber very much wanted. He was very happy when I told him I hadn’t seen the show. I was uncolored by any previous theatrical interpretation of the character."

Rossum was only 16 when she first auditioned for director Joel Schumacher’s lavishly produced adaptation. How did she deal with her teenaged nerves?

"I’m never gonna get this," she thought. "I’m too young, not famous enough. I hadn’t been singing in five years when I tried out for the part. It was a skill I had, so I just had to remember how to use it."

But when she got the role, her relative naiveté helped with the development of Christine’s character.

"I wanted her to be the real girl at the center of all this theatricality and spectacle, to be the one real center that people could identify with and care about."

According to both Webber and Schumacher, Rossum literally grew up over the course of the shoot. The development and deepening of her young woman’s voice is evident on the film’s soundtrack. This is exactly what the director and writer had in mind when they chose to cast a teenager, Rossum says.

"Andrew and I worked closely together to make sure that the arc in Christine’s character – from young girl to womanhood – would be reflected within the vocals. ‘Think of Me’ is pure and innocent, like a little bell, and by the time we get to ‘Point of No Return’ it’s much darker and richer and more powerful because she has become a woman, and the scene is infused with this dark sexuality. Vocals in this film take the place of dialogue, and we wanted the vocals to have the same textures and flavors as normal dialogue."

Since Rossum had little concept of the spectacle that is "The Phantom of the Opera," she was taken aback by the audition process.

"I walked into the audition, and it was on a set. There were hair extensions and costumes and a grand piano, and 50 people in the crew. Big, swooping crane shots and Joel Schumacher yelling ‘Action!’ It was so surreal that I can barely remember it. Joel said he came over to tell me something and I was shaking."

"I went to his living room in New York, and he was sitting on a couch. There were no pleasantries – it was the funniest audition I’d ever been to. The first thing he said was, ‘Shall we?’ So I went ahead and sang the two biggest numbers in the show. Afterward he went, ‘That was really good. I’m Andrew Lloyd Webber, nice to meet you!’ Later on, I found out I got the role."

The major drawback of filming Phantom? The period costumes and corsets, according to Rossum. "The whole thing was insanely uncomfortable," recalls the slender actress. "I remember Joel told me that during the ‘Think of Me’ scene, I stood in costume in the same spot for 12 hours.

"I don’t remember that. I remember being so happy and so focused that it felt like one, maybe two hours. But it was insanely uncomfortable – I won’t lie. It permanently changed my shape. I’m a lot smaller than I should be because the costumes deformed me at a crucial stage in my life!"

Whether or not the filmmakers robbed Rossum of her girlhood, the onscreen results testify to the auspicious development of a promising young actress.

The Phantom of the Opera is currently in theaters.