Bryan Bertino: Puts Aside his Love of Sports to Scare Us in The Strangers 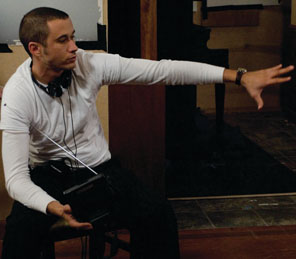 Bryan Bertino loves sports statistics, and he doesn’t care who knows about it. Or so it seems.

Initially, such a statement may seem a bit odd coming from a Hollywood writer/director. Bertino, 30, goes on to explain, “I like baseball, basketball and football, but I never watch a game. I don’t have the time.”

The Strangers marks the feature film debut of this writer/director from Texas, now a transplanted Angeleno. Bertino hasn’t forgotten his Texas sports roots, as he remembers his childhood teams.

“Growing up I was a Cowboys fan, I liked the [Texas] Rangers, and the Braves.”

Was he a San Antonio Spurs fan (a perennial foe of our Lakers)?

“No,” says Bertino, “I hate the Spurs, so I’ve been pulling for the Lakers.”

Bertino is now my favorite Hollywood hotshot. But don’t call him that to his face, as he hasn’t forgotten how difficult it was for him just to get to Los Angeles from Texas.

Of his humble beginnings, Bertino says he was pushed into cinematography by the urgings of a friend because he liked to tell stories.

Bertino’s script for The Strangers was a quarterfinalist for the Nicholl Fellowship in 2004, an award given to independent writers by the Academy of Motion Picture Arts and Sciences. In 2006, Universal Pictures bought it and decided to produce it.

Bertino is most proud of the characters in The Strangers that developed from his ideas.

“I really love the characters. I did not try to glamorize them in any way. I wanted to show them as regular people who make mistakes.”

This dynamic comes across the screen well as both protagonists, played by Liv Tyler and Scott Speedman, are easy to root for. So fear not lovers of the horror and scary movie genre, Bertino is not planning to lose himself within the seemingly endless numerical lines of homeruns, RBIs or slugging percentages.

When asked about his plans for future projects, he says he’ll be sticking around, frightening us along the way.

“I like the idea of scaring people and molding horror with melodrama,” he assures.

Maybe he can write his next script around this year’s L.A. Dodgers.

The Strangers releases in select theaters May 30.

Interviews
Lily James and Sebastian Stan find a real relationship at the heart of 'Pam & Tommy'
150 views
Interviews
Ricky Gervais knew people would be mad about his new Netflix special. He did it anyway
771 views

Interviews
The star of Oscar-nominated 'Flee' gives his first interview: 'I wanted my story to be seen'
1,148 views

Interviews
'Crazy Rich Asians' made Henry Golding a star. Now he's showing Hollywood everything he can do
840 views