A Look at 1968: From Betsey Johnson to the Beach Boys: A Year of Change 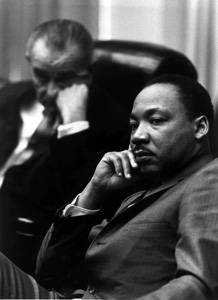 He was the Barack Obama of his day. Democratic Presidential nominee Robert F. Kennedy arose like a phoenix from the ashes of his slain brother John.

Many saw RFK as a savior. Some saw him, not just as the hope of the Democratic party or the nation, but for humanity.

On June 5, 1968, however, that hope came to an abrupt end when Kennedy was assassinated at the Ambassador Hotel in Los Angeles. He was shot, at nearly point-blank range three times in various parts of his body.

His murderer was a 24-year-old named Sirhan Sirhan who had become obsessed with the popular politician. The nation reeled from the news that a Palestinian immigrant had taken the life of such a brightly shining political light. Kennedy’s killer still remains jailed to this day.

There have been many films to chronicle this frightful chapter in American politics. The most recent is Bobby, directed by 1980s Brat-packer Emilio Estevez. His ode to the slain Kennedy pays homage to the trust and fallen dreams of so many and contains a star–studded cast, including Lindsay Lohan and Demi Moore.

A mere two months before the Kennedy murder was another tearful event that still plagues our nation today. Civil Rights leader Martin Luther King, Jr. met his demise on the balcony of the Lorraine Motel in Memphis on April 4, 1968.

King was America’s son. He let the world in on a little idea that he’d been kicking around called equality.

That idea came to fruition through his rich and powerful “I Have a Dream” speech delivered on the steps of the Lincoln Memorial years before. King’s legacy as a Nobel Prize winner, father, preacher and activist have been immortalized on film, in history books and even musically by bands like U2 (“Pride: In the Name of Love”).

Stateside would remain a tumultuous mix of social conviction and new experiences both personal and political. 1968 saw the onset of the Chicago riots. This event still serves as a blight on U.S. history.

By the time the smoke cleared, 11 people would lose their lives, and over 500 people would find themselves injured. What could spark such an unusual display of behavior in our country at a time when unity was so greatly needed? Racism and poverty.

Similar to the prejudice that served as the gruesome underbelly to the strife in Los Angeles some 20 years later, the Chicago riots started when impoverished and fed up African-American inhabitants of Chicago’s South Side took to the streets. Violence soon followed with men, women and children looting area homes and businesses.

According to reports, 125 fires were set. Hundreds upon hundreds of people were left homeless.

Despite a mandatory curfew put into effect by Mayor Richard Daley, the melee continued. Not even President Lyndon Johnson’s executive order to have troops enter the city could quell the anger felt from ghetto life.

The fashion of the day was also as unpredictable as the socio-political climate. While the early 1960s saw the empire-waisted creations of quaint style-makers like Givenchy and Yves Saint Laurent, the latter portion of the decade was a wild and furious swirl of electrifying colors and psychedelic patterns. Ushered in by the fashionistas of the day (Andy Warhol’s muse Edie Sedgwick, the hippies and the mods), fashion became a wild trend, but it also created some names and brands that are still cherished today.

1968 saw the birth of the house that would become Calvin Klein. The world-renowned designer launched his company with a childhood friend from his native Bronx. Together, the two changed the way people viewed American staples like undergarments and blue jeans by creating a sex-charged frenzy around their respective uses.

Betsey Johnson and her British counterpart Zandra Rhodes also rose to quick and sudden fame around this time. Johnson had been working as a guest editor at Mademoiselle when she was sent to swinging London to cover its burgeoning clothing scene on Carnaby Street. Upon returning to the United States, Johnson began designing for the earliest incarnation of her current brand – a boutique called Paraphernalia.

Few people born after the 1970s are aware of the huge impact that the Beach Boys had on music at this time. This super-group of SoCal natives released the now cult-classic LP Friends. To this day, that record along with many others lives as inspiration to musicians across the pond and domestically.

With music-makers and actors often traveling in similar circles, it was no big surprise that groups like the Beach Boys would often hob-nob with other noteworthy talents. However, no one could have imagined that a sociopath like Charles Manson would be the glue to bind many popular social circles in 1968.

As the Beach Boys were releasing a cleansing and refreshing sound on an adoring public, Manson was exhausting his minor Hollywood connections trying to get his music heard. He’d been mildly successful in landing meetings with Doris Day’s son and producer Terry Melcher as well as with Brian Wilson and company, but nothing would ever come of his singing and songwriting desires.

Around this time, an actress named Sharon Tate was beginning her life with her new husband – a promising film director named Roman Polanski. The following year, Tate would be dead at the hands of Manson and his followers. As for the others in this unique social cadre … well, we all know what happened to them.

Although, 1969 would be considered the “Summer of Love,” 1968 will still take its place in the annals of history as a year when anything could happen, and practically everything did.