When Did You Last See Your Father?: (Sony Pictures Classics) 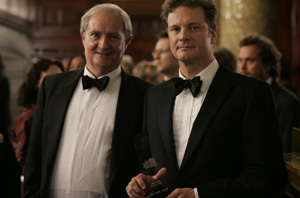 He was an embarrassment to Blake (Matthew Beard), a young English kid with hopes of one day becoming a writer. However, it is his relationship with his father, Arthur (Jim Broadbent), that shapes the world in which this son lives.

Colin Firth (Bridget Jones’s Diary) plays the elder Blake. As an adult, he is a celebrated writer who has reached the breaking point with his slightly obnoxious dad.

Through touching flashbacks, this father-son story unfolds handsomely, letting the audience in on the dynamic of a boy living in the shadow of a charming but dubious role model. When Arthur is diagnosed with cancer and given only a short amount of time to live, Blake re-examines their strained relationship.

When Did You Last See Your Father? is incredibly moving. It’s nice to see a drama like this roll out with a masculine touch for a change, as opposed to sitting through yet another gut-wrenching chick flick. Director Anand Tucker (Shopgirl) takes great care to mold full portraits of his cast of characters.

When Did You Last See Your Father? releases in select theaters June 6.