You Don't Mess with the Zohan: Saving the World, One Joke at a Time 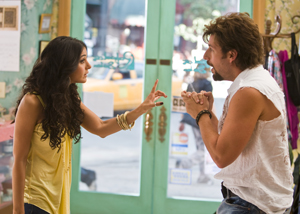 Adam Sandler’s latest opus of frat boy humor, You Don’t Mess with the Zohan, re-teams him with Robert Smigel, “Saturday Night Live”’s longest running staff writer (25 years) and “SNL” alum Rob Schneider (who is rarely seen in anything that isn’t a Sandler films these days). Sandler stars as the Zohan, an Israeli counter terrorist commando who fakes his own death in order to pursue his true passion, hair dressing, in New York City.

The three seemed thrilled to be sharing each other’s company as they sat down to discuss the process of making a comedy whose central theme is the Palestinian-Israeli conflict, a subject rife with tension.

Zohan has the potential to offend many people, and they realized that while making the film.

Smigel describes working on the script as a long process.

“We were careful,” he adds. “I had some friends I would occasionally send scripts to, Arab-American and Jewish friends, just to get a sense of if it was too much or appropriate.”

Schneider jokes, “You have to be equally offensive to both sides.”

“The last thing we were doing was trying to antagonize anybody,” Smigel continues. “Anytime you do comedy about a sensitive subject matter, there are going to be people with passions on both sides who are going to ultimately find something offensive because they have something invested in it.”

Sandler seems wounded even by the implication that the film might cross the line.

“My intention is never to hurt anybody,” Sandler says, adamantly. “I’m happy when people are having a good time. And if someone comes up to me and is offended by anything I’ve done in the past, I listen to them, and I get bummed out,” he says, sounding injured. “When we’re working our asses off on the script and making the movie, I’m just picturing people having a great time, and the fact that anybody walks away saying ‘Oh, man, I wish they didn’t say that.’ That breaks my heart. We just want to make a funny movie.”

So then why choose such a delicate subject?

“As a kid you always heard about the Israeli army,” explains Sandler. “You always heard they were this tiny little country, everyone surrounding them wants them gone, and anytime someone comes after them, they take care of business. As a Jewish kid, you were proud of that. I just admired them.”

But it wasn’t admiration that lent itself to the comedy.

“I thought it would be funny to see an Israeli soldier that was just a badass, a warrior, fearless, and he had this secret dream of wanting to do something else but was embarrassed to share it with anybody,” Sandler chuckles. “I always pictured it like Charles Bronson in Death Wish: you’re messin’ with the wrong guy.”

“On ‘SNL,’” Schneider offers, “some of my favorite memories are [Sandler and Smigel] coming into the room and trying to read their sketch to me at 3 a.m. and not being able to get the words out because they’re laughing so hard and drooling on themselves.”

“[Sandler]’s the most instinctual guy I know in show business,” he admits. “It comes from a place of joy. When he’s excited about something he bounces out of his body. Smigel has the same thing.”

But Emmanuelle Chriqui (“Entourage”), Zohan’s token eye candy, says the film is more than that.

“I think to be able to shed a little bit of light in a really bleak situation is what we do when people laugh.”

Sandler, Schneider and Smigel are just trying to save the world, one joke at a time.

You Don’t Mess with the Zohan releases in theaters June 6.