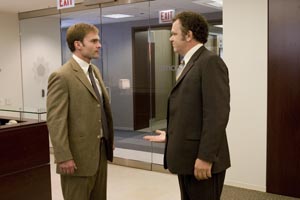 After years of American Pie notoriety, Seann William Scott is getting the chance to prove he’s more than just Stifler in his new film, The Promotion, co-starring Jenna Fischer (“The Office”) and Oscar-nominated, comic genius John C. Reilly.

With surprising depth, pathos and talent, Scott turns in a quiet, subtle, rapturously funny performance as Doug, a Chicago supermarket employee ferociously clawing his way up the food chain against Richard (Reilly), the nefarious new guy from Canada against whom he must compete for a coveted manager position at a new store location.

Two men, one supermarket – only one will rise victorious.

Written and directed by Steve Conrad, the film thematically partners with his other work.

“I wrote this, The Weather Man and The Pursuit of Happyness at the same time. There’s a real mirror image, tone wise, to Happyness, but they’re essentially the same story. It’s about a guy who needs a job.”

Scott was thrilled to be involved, despite enormous personal strife during filming.

“The movie was an extraordinary experience because I’d wanted to do it for two years,” says Scott. “Then five months before we [started], I found out my dad was sick.”

While filming the movie, Scott’s father was battling bone cancer and his mom had leukemia. His mom survived, his father sadly passed away three months after filming ended.

When asked about his character’s soft, genuine nature he says, “I was pretty vulnerable at the time. I was a little more broken and maybe that worked to make the character more sympathetic ... but it was also just a great experience as an actor to do something different instead of being the dancing monkey.”

Not that he begrudges his Stifler roots: “The only reason I have a career is because of those movies.”

Scott was brought to Conrad’s attention by Todd Phillips, the director of Old School and a good friend.

“Seann stole moments in Old School,” said Conrad, “and that seems like a tall order to steal scenes from Will Ferrell. I thought he was really strong and, if he’s given the chance to be in a movie that’s less broad, he’d rise to the occasion.”

Scott was also thrilled to work with Reilly.

“I think John C. Reilly is unbelievable in the movie,” Scott gushes. “My main focus was trying not to screw up takes. He was so funny. He is my favorite comedian in America.”

While Conrad admiringly says, “I was astonished by how perverse his brain can be.”

“I would like to do every movie for the rest of my life with John,” adds Fischer, though she seems equally devoted to Conrad.

“I loved The Weather Man and The Pursuit of Happyness, and I was dying to meet the man behind the words,” she recounts. “And then I met him,” she grins, “and he’s so laid back and groovy and handsome and artistic and thoughtful and writer-y.”

“My relationship with [Conrad] is that of a college student with a hot professor,” she continues, “and you can’t wait to go to that class so you can hang on his every word. That’s what shooting this movie was like for me. ‘I can’t wait to get to Professor Conrad’s class,’” she says dreamily. “He’s completely crushable.”

For Conrad the film is about “when your expectations as a boy meet and have to make peace with the realities of your grown up life; it can be a real collision.”

“I think it’s nice to see a comedy with human moments in it, something relatable,” says Scott. “People are just trying to do the best they can, and it’s hard.”

Luckily enjoying The Promotion is easy.