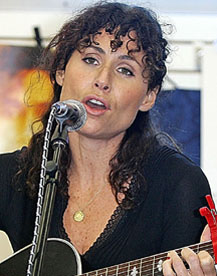 Everyone has a voice. But does that mean everyone has to cut an album? Hollywood stars think so.

The record-store cut-out bins and private kitsch collections are bursting with releases from actors who, in a blur of hubris, mistook themselves for singers.

Wait – it gets better. On her album, she covered the Stones’ "Satisfaction."

Equally surreal moments include a recording of "Proud Mary" by Leonard Nimoy, a spoken-word take on "Lucy in the Sky With Diamonds" by William Shatner, and a version of "Stand By Me" by Muhammad Ali. (Partial excuse: The fighter was still Cassius Clay at the time.)

You can hear all these inadvertently brilliant recordings on Rhino’s "Golden Throats" CDs.

But now a trio of prominent thespians – Robert Downey Jr., Minnie Driver and Kevin Spacey – have all risked critical ridicule this season with debut CDs.

Spacey is taking the most daring leap by doing his own singing as Bobby Darin in the movie Beyond the Sea, which opens this month. And he’s performing Darin’s music live in venues around the country. So, if nothing else, you have to give the guy credit for nerve.

Here’s how the latest batch of actors-turned-chanteurs really sound:

KEVIN SPACEY, Beyond the Sea soundtrack.

Those who watch late-night talk shows know Spacey as a terrific mimic. But why listen to what amounts to an "I Can’t Believe It’s Not Bobby Darin" CD when you could just as easily play the actual thing?

Viewed this way, Spacey’s recording becomes something of a stunt, if a relatively accurate one. Spacey has the rhythmic chops to navigate Darin’s brisk phrasing – no mean feat – though he clearly lacks the earlier star’s elan.

You can measure the limits to his voice in the ballads. His take on "Mack the Knife" has more smarm than charm.

The album’s producer, Phil Ramone, set Spacey’s voice in some nice arrangements and surrounded him with enough echo to give his singing a bit of shimmer.

Of course, if you’ve never bought a Bobby Darin album, and the movie inspires you, it would be a sin to start here.

Joni Mitchell fans probably still haven’t forgiven Downey for his mewling cover of "River," which he moped through on "Ally McBeal" some years back.

But it’s not Downey’s eccentric melodies that make his record unlistenable. It’s his way overarticulated singing. He sounds like "SNL’s" Jimmy Fallon doing a vicious satire of Dave Matthews.

Downey leans into the husky end of his voice, then shoots up for a cracked falsetto with such self-consciousness, it’s impossible to hear the tune.

MINNIE DRIVER, Everything I’ve Got in My Pocket

Driver owns an iffy instrument with little wind power and less distinction. Her pale tones aren’t done any favors by her drowsy country-tinged tunes. The album has so little momentum, it makes the Cowboy Junkies seem manic. Even her cover of Springsteen’s "Hungry Heart" threaten to lapse into a coma.

Ultimately, her record isn’t as much ear-achingly bad as it is a stone-cold bore.

DENNIS QUAID: An aging heartthrob who karaokes his way through R&B standards like a frat boy on a four-day bender.

BRUCE WILLIS: Smug versions of soul classics from someone who, vocally speaking, lacks one.

EDDIE MURPHY: Party All the Time – A comedy record, right.