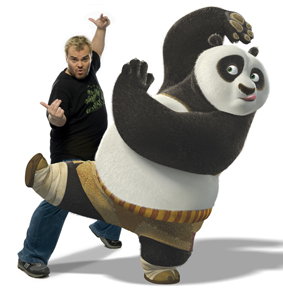 As cute and cuddly as a fat panda may be, it’s not the first thing one thinks of when it comes to something as active as kung fu. This unlikely premise is the story of the new animated film Kung Fu Panda.

Jack Black voices Po, a panda who obsesses over kung fu, and, through a freak accident, ends up being chosen as the “Dragon Warrior,” much to the chagrin of Master Shi Fu (Dustin Hoffman) and the Furious Five. Although the premise seems a little slapstick, and there’s a fair amount of that throughout, the film rises above cheap jokes to deliver something entertaining, beautiful and touching.

“Doing this movie helped me get back in touch with my inner child,” claims Black.

“The film has so much heart,” states Lucy Liu, who voices one of the Furious Five. “You forget that you’re relating to animals.”

Despite humor and morals, Kung Fu Panda also delivers on its title: kung fu. Oh, and what glorious kung fu there is. The action is inventive, fast-paced and, most important, kick ass.

“It’s my way of living out my kung fu fantasies,” jokes Black.

Ever full of quips, Black also brings subtlety to his role even when he’s not directly on camera.

“[Black] is a comedian, but when it comes to acting he is very serious,” praises Hoffman. “He’s very bright and true to himself.”

Good thing, too, since being true to yourself is the central theme of the film. In fact, Black sees a lot of parallels between Po and his own career.

“I used to imitate a lot of celebrities,” explains Black, “but it wasn’t until I wrote my own stuff that I came through.”

Looks like Black also learned to embrace his inner Po.