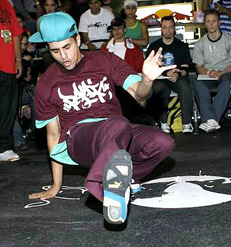 The annual Dance Camera West Film Festival is one of the coolest things about living in Los Angeles. Founded in 2002, the film festival focuses on the emerging art of dance made for the screen. For people with a passion for dance and a love of avant-garde film, the festival is a wet dream.

With confidence, you can expect to see some fantastically bizarre and interesting short films. The screenings take place all over the city from the most hoity-toity cultural institutions like the Getty Center, the Hammer Museum or REDCAT to independent film houses like the Aero. Yet in each of the venues the ticket prices are affordable, never exceeding 15 bucks for admission, and many of the events are totally free.

For the perpetually short-on-cash dance community in Los Angeles, this is much appreciated. This year’s festival has some exciting treats including Inside the Circle, a documentary on the lives of breakdancers. A dance party follows a free screening at the Hammer Museum June 14.

The whole festival is punctuated by a sense of fun. One gets the definite feeling that the event’s producers and the filmmakers themselves are party people who like to talk dance as much as they like to rock out themselves. The event will also host panel discussions and workshops.

It’s appropriate that Dance Camera West happens in June because the films tend to be irresistibly inspiring. They make you want to leap out of the theater and dance the day away. With summer just around the corner, this is a real possibility.