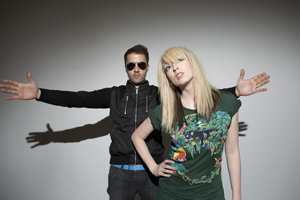 It is a case of the jitters that guarantee a good gig for the Ting Tings, the buzzworthy English electro-pop duo featuring vocalist Katie White and drummer Jules De Martino.

“I always get nervous,” White says. “If I don’t, I’ll do a bad gig. We make sure we don’t rehearse because when we don’t know what we’re doing, we 100 percent tend to perform better.”

Instead of rehearsing, they “pace around, and remind each other not to forget a part which we always forget anyway,” she says, laughing. “We drink two vodkas. No more than two though, because we can’t play drunk.”

White doesn’t need Liquid Courage to electrify on stage. The stylish, (she makes her own clothes), Debbie Harry-esque frontwoman is already a cool indie It-Girl, despite a teenybopper past that includes listening to the Backstreet Boys and the Spice Girls as a teen, and even going as far as forming a girl group called TKO with her friends, opening for Brit boy bands like Five.

“I grew up in a farm just outside the city, so I wasn’t music savvy,” she explains. “But as I got older, I started listening to bands like the Talking Heads and Tom Tom Club.”

It is evident White’s pop past is a major influence on the Ting Ting’s music, but disposable they’re not; their upbeat sound holds a deeper message. Take for instance their single, “That’s Not My Name.”

“It’s not literally about someone forgetting their name,” White explains. “It’s about feeling like you have nothing interesting about yourself. You go to a room, and you’re the most boring person there. And that’s what we felt at the time.”

She’s referring to her and De Martino’s experience with their band prior to the Ting Tings, the ill-fated Dear Eskiimo.

“We got signed to Mercury Records, and within a few months we had a really horrible time with it,” she says.

Amidst clashes and poor management, it was a pitch from the record label to pose for lad mag FHM to sell more records that did it for her.

“I just thought, I’m with the wrong label, and I told them to fuck off. So, we never got our record out,” she says. “[It’s] not my cup of tea. I like the fact that people like Blondie and Tina Weymouth of the Tom Tom Club are still very feminine, but they’re still sexy with integrity. I don’t want to de-feminize myself. I just don’t want to ‘sex’ myself up for men’s magazines. And there’s better looking girls with far bigger things that would do it anyway.”

It’s no surprise that the theme of their debut album, We Started Nothing, is “frustration.” After Dear Eskiimo disbanded, White and De Martino, filled with self-deprecation, continued to play together at house parties in Manchester, if only to vent their anger about the music business.

In a rather ironic turn of fate, the duo generated major buzz again (attracting the likes of top music execs like Rick Rubin) and were quickly signed on to Columbia as the Ting Tings.

As flowers grow from where dirt used to be, White and De Martino are stronger and savvier about the business and are enjoying recent success; their single “That’s Not My Name” reached No. 1 on the UK charts; popular shows “Gossip Girl,” “Ugly Betty” and an iPod commercial are prominently featuring their music.

“It’s not whether some person from a magazine calls us ‘The Next Big Thing.’ It’s flattering, but we know it’s bullshit in a way,” White says. “As long as we make a great album and we put on good shows, which we obviously aspire to do, that’s all that matters.”

We Started Nothing is currently available. The Ting Tings will perform June 13 at the Troubadour. For more information, visit www.thetingtings.com.