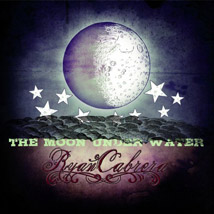 Although he’s been very successful with his previous releases, The Moon Under Water marks Cabrera’s attempt at leaving behind his somewhat of a teeny-bop image. Gone is the blonde, spiky hairdo. Also gone is Cabrera’s major label affiliation with Atlantic.

But for all of the reinvention, the singer has not exactly gone out on a limb with his music, sticking pretty closely here to the emo formula that got him where he is. A couple of tunes show a bit of growth: “Say” taps into a Fleetwood Mac-style, while “Enemies” is lyrically intriguing.

But overall there is too much reliance on the tried and true here: emo clichés like overly breathy vocals and snippets of U2 mimicry.

The Moon Under Water is currently available.