The Keys To The House: (Lions Gate) 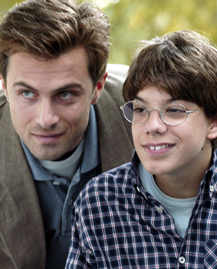 Director Gianni Amelio’s The Keys to the House is an honest, thought provoking look at how disease can disrupt and potentially destroy even the most intimate bond between parent and child.

Inspired by Giuseppe Pontiggia’s novel Born Twice, The Keys to the House is the story of Gianni, a young father attempting to forge a relationship with his handicapped son Paolo, whom he meets for the first time when Paolo’s a teenager.

Having suffered a traumatic birth, Paolo is disabled both physically and psychologically and must travel on a yearly basis to a special hospital in Berlin for rehabilitation. Gianni hopes to form a relationship with his estranged son by accompanying him to the hospital for the first time during one of his annual visits. However, lost time coupled with Paolo’s debilitating disease makes the complex emotions involved in the reconnection between father and son especially difficult.

The beauty of this film is the way in which Amelio subtlety explores and dissects the strong emotional bond, parental responsibility, as well as the extreme guilt Gianni feels toward Paulo, instead of throwing the film’s poignant underlying exploration of fatherhood and the nature of disability in the audience’s face. Although the film’s story line meanders a bit and is not entirely cohesive, the picture never loses its focus.

Perhaps the film’s greatest accomplishment is the casting of its two lead roles. Paolo is played by 16-year-old Andrea Rossi from Italy, a first-time actor who amazingly has the same disabilities as his character. Rossi’s spontaneity, sharp mood swings and innate helplessness, coupled with a deep longing to be independent, make his performance outstanding. Despite not having to fake his disability, Rossi’s abilities as an actor cannot be denied. On the same note, Rossi’s co-star Kim Rossi Stuart (Gianni) gives a compassionate performance filled with raw honesty and tension allowing the audience to experience what it might be like to be in his shoes.

The Keys to the House is currently playing in limited release.