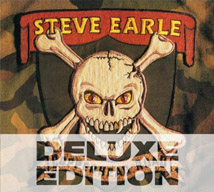 Among critics and admirers, Steve Earle is country music’s unanimous king. He is their Elvis of bluegrass. Johnny Cash in a T-shirt and blue jeans. Bob Dylan with a Texas drawl. And with the 20th anniversary re-issue of his now landmark Copperhead Road, one would be hard pressed to disagree.

Expanded with a second disc of 17 live performances from the late ’80s, including 11 previously unreleased tracks, Copperhead Road reveals the once gentler, nonabrasive side of popular music’s most outspoken critic.

The first disc reprises the original line-up with standards like “You Belong to Me, “Nothing But a Child” and “Back to the Wall.” Disc two includes live performances of “The Devil’s Right Hand” and a solo “Johnny Come Lately.”

Keep an ear open for a bluesy rendition of “Nebraska.” It’s not quite as good as the Springsteen original, but it’s not far off.