Clinic: May 20 @ the Troubadour 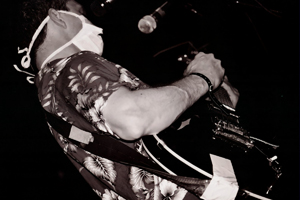 They’re still hiding behind surgical masks, though they’ve grown bored with scrubs and opted for uniform Hawaiian shirts – you know, ’cause surgeons like to go on vacation, too. Ade Blackburn’s still got a paranoid, halfway-intelligible slur about him, but bassist Brian Campbell offered nary a beaming smile from under his mask this time around, thereby removing a certain warped element from the visual.

The strange thing about Clinic is that while their records aren’t terribly different from one another, watching the band live really brings out certain elements of their style. When they’re on stage, one more easily notices how prominent a part the melodica holds, or how quick Jonathan Hartley actually is on guitar. They’re an underrated bunch, that Clinic.

They played new record Do It! in its entirety, following the set with a bitty intermission and old favorites, the most well-received being “Walking With Thee” and rather “Jack the Ripper”-ish “Pet Eunuch,” off 2002’s Walking With Thee. They were also surprisingly tame after a dramatic opening set by Shearwater, whose Jonathan Freiburg recently quit Okkervil River in order to pursue Shearwater full time, and whose drummer Thor Harris packs a mean hammer dulcimer.