Ceci Bastida: From Hardcore Ska to Pop: A Reinvention 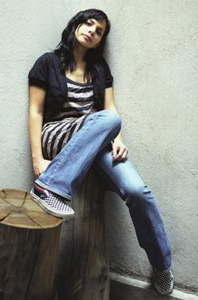 Ceci Bastida recently moved to Los Angeles from her native Baja California. Performing live, she has an inviting personality, and her experience in front of audiences tracks back to when she was part of what is now a legendary group from Tijuana called Tijuana NO.

At the tender age of 15, Bastida wrote songs, played the keyboards and was the lead singer for Tijuana NO. They set off a huge movement of hardcore ska fanatics and became known as some of the first women of Latin rock. They continued to rock for 12 years, recorded three albums for BMG Records from 1995 to 1998 and today are considered to be one of the most important ska bands of the ’90s.

Bastida then took a couple years off from all the mayhem of touring, and in 2000, she was invited to sing back up and play keys with major Sony recording artist Julieta Venegas. Bastida has been doing that since, learning more about music.

All of her ups and downs inspired her to work on her new solo project. The EP is called Front BC, which stands for Frontera Baja California, and she received help from producers like Jason Roberts, who has worked with bands like Control Machete and Plastilina Mosh.

One of the EP’s songs is called “Canta el Rio.” In English it means, the River Sings. The song is about how hard a lot of the illegal immigrants work to get to the United States, only to wind up questioning if it was all worth it.

These days, Bastida is in the studio at Santa Fe Tracking Station with producer Andrew Williams working on a full-length bilingual album set to be finished this year. At her recent shows she has been testing her new songs in front of audiences.

Instead of going the hardcore ska route that some people remember her for, Bastida is looking to be seen as an artist that has more to offer. She is opting for a smoother, more lyrical, yet respectable pop flavor.

It’s apparent that Bastida is in no hurry for instant fame. She’s making music for the simple (or complicated) love of it.

It takes a lot of courage and pride for an artist to go from thousands shouting at you from the crowd to taking a step back and allowing yourself to grow new roots. Yet this is the city to do just that. Here you can reinvent yourself, and so she is.