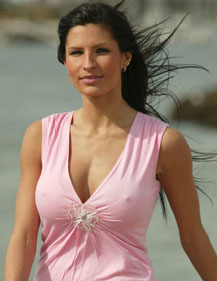 As head clothing designer at companies such as Quiksilver, Billabong and Hurley International over the course of her career, she is credited with spicing up the formerly staid world of beachwear. When Hurley launched in 1999, for example, she introduced low-rise pants for girls and rhinestone detailing to T-shirts, considered groundbreaking at the time.

"The early Hurley product ... was the first to be a fashion-driven surf brand," said Dick Baker, chief executive of Ocean Pacific in Irvine, Calif.

Now, Murray hopes to break barriers again. She and partner Ziggy Williams, also a former designer at Billabong and Hurley and a lifelong surfer, are launching Aqua VI, a "premium" surf line for men and women 18 to 24.

The two want to take advantage of what they see as a gap in the surf market. Currently, many of the large companies design products for young teenagers. Design elements are somewhat limited because prices need to stay palatable for the young set – and their parents, Murray said.

But as those kids grow up, they still want to wear surf fashion but are ready for something more distinctive – and are willing to pay for it, Murray believes. Aqua VI clothing will include embellishments such as rivets, metal studs, ornate jewelry detailing with a baroque feel, silk fabrics and leather trims. The extra details boost the price: T-shirts will sell for $30; jeans for $150.

Murray dreams of eventually expanding into home furnishings such as sheets and towels.

"We want to create a full-board beach-lifestyle brand with class," she said.

Murray’s strategy has attracted some connected investors. Barry Perlman, a founder of Lucky Brand Dungarees, is in talks with Murray to back the brand, she said. Perlman did not respond to an interview request.

Murray, who walked away from Hurley with a windfall, has also invested money in the startup, as has Williams and a few silent partners. Murray was a partner in Hurley when Nike bought the Costa Mesa-based brand in 2002. Murray said Nike paid $100 million for the company but wouldn’t provide details about how much she made. Bob Hurley, the founder of Hurley International, declined to comment on the sale price.

In December 2003, Murray left Hurley, thinking she would build a house in Hawaii, retire and spend more time with her daughters, Taylor, 14, and Morgan, 11.

But a frustrating back-to-school shopping experience with Taylor revived her creative and business juices.

Taylor wanted stylish clothing but had tired of mainstream surf brands. Besides Juicy and Abercrombie clothing, she couldn’t find anything she liked.

"It got me thinking there’s a whole niche in the surf market that’s not being filled," Murray said.

Retailers previewed the Aqua VI line in November 2004, and the clothes should hit stores in April. Murray hopes boutiques, better surf shops and high-end department stores such as Nordstrom will carry the brand.

Billy Stade, owner of The Closet, a boutique which has three stores in Orange County, said Murray’s design skills are well-known and respected.

But the real test for anyone trying to create a more exclusive fashion line is distribution, Stade said. If the product is carried in too many stores, it loses its cachet; too few, and it’s hard to make money.

"It’s a tricky line to walk," he said. "They key is who your end user is. That’s what makes a brand."

Bob Hurley, who calls Murray "brilliant," believes consumers are willing to pay for clothing that is unique.