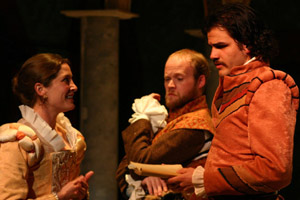 An acting troupe regales the audience with tales of its successes and failures performing in 16th century Europe.

Three actors, recently returned from incarceration in a Turkish prison during the Holy War, add a woman (a luminescent Paige White) to their merry band after being mesmerized by her poetry. The controversial move catapults the troupe into the limelight.

Other players audition for the esteemed acting company, and their numbers and their financial success grows. Until, during an appearance in front of the French king (a hilarious Luke Bailey), the troupe performs a biting satire of the pope and his evil machinations, which galls the queen mother into ordering the Gelosi’s execution.

“I, Gelosi” peels away the masks of comedy and tragedy and contemplates what is art and what is it meant to do in an engaging and entertaining way.