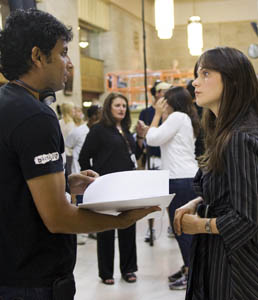 For many, he is the second coming of Alfred Hitchcock. He can easily be considered a provocateur of suspense. His past films The Sixth Sense and The Village packed serious punch at the box office, while leaving moviegoers with an overwhelming need to sleep with the lights on.

Now auteur M. Night Shyamalan is back with a new creative endeavor sure to spook the bejesus out of all who dare to look upon it. That film is called The Happening.

From the first glance of the film’s trailer, one is left with myriad plot possibilities swirling in his or her head. Could this film be about aliens from another planet? Is it about mind-controlling zombies that take over the big city? Is it another Cloverfield?

SPOILER: It turns out that the world is being affected by a horrible toxin given off by plants. When the toxin is inhaled by the public, it results in the victim being overcome with the need to commit suicide – by any means necessary.

And Shyamalan didn’t scrimp on the gruesome, either. Where he used to leave a lot of violence up to the imagination, he has now gone balls-to-the-wall on the scary tip for fans.

Shyamalan first got the idea for The Happening as a vision in his head while working on his last feature, Lady in the Water. Mental pictures of abandoned cars soon filled his head, and from there, he wove his creepy tale of terror.

“It ended up being about this couple played by Mark Wahlberg and Zooey Deschanel, and how they find themselves in the middle of this apocalyptic event that’s happening only in this section of the United States,” he explains. “And they can’t get out of it. They’re trying their best to stay alive and get out of this situation. They don’t even know what’s happening. Everyone’s dying from this airborne toxin. They don’t know whether it’s terrorists or a nuclear event. It’s a very, very horrific premise.”

For actress Zooey Deschanel (sister of “Bones” star Emily Deschanel), working with Shyamalan would give her the perfect opportunity to delve into a heavier character than some of her previous onscreen portrayals.

“I think it’s a more grown-up role which is nice for me because it’s good to grow up,” admits the actress.

She also enjoyed the hands-on approach that her director took with the material.

“I love working with Night because he is a real old fashioned-director, and he knows what the shots look like. He knows what he wants. He knows what the film’s going to be before he makes it. He knows why he writes every line, and he has a specific idea of what everything is supposed to mean in terms of the picture.”

For Wahlberg, he expresses similar feelings of warmth for his fearless leader. When describing his first meeting with Shyamalan, he speaks of a man that welcomed him with open arms into his project.

“Yeah, we had, like a three-hour dinner. Had some sushi. Drank a lot of sake and talked about how much we enjoyed each other’s company,” he jokes. “We hadn’t worked together. He had worked with my brother and worked with Joaquin [Phoenix] twice. I was always jealous of both of them because they had gotten to work with Night and I hadn’t.”

As for the actual on-set process? It looks like Shyamalan has created another lifelong devotee: “Initially I didn’t know what to expect going in,” admits Wahlberg, “but now I dread working with another director because I’ve never seen somebody as prepared and as focused as him.”

The Happening releases in theaters June 13.