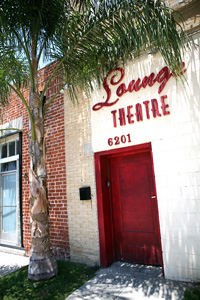 For some, L.A.’s Theatre Row is the West Coast equivalent to Broadway. This is the strip of Santa Monica Boulevard tucked away under the magnificent pomp of the Hollywood Sign. Sure, you’ve seen these colorful and oftentimes quirky little theaters a thousand times before.

But what do you really know about them? If the answer is “nothing,” then here’s a little tutorial on Los Angeles’ best kept secret.

How cool is the Lounge Theatre (6201 Santa Monica Blvd.)? One has to truly give it up to a playhouse with its own MySpace page.

Social networking aside, this 60-seater bares all the charm of a quirky ’60s variety show stage but with the most modern amenities. It has a full kitchen and plenty of space for guests to kick back and chill between productions.

For those who are just aching to get out there with their fabulous new project, the Lounge is also looking for comedy shows that can be slotted into the its Sunday night slot.

This theater company was founded in the late 1980s by several Cal State Fullerton grads. They’ve brought the works of heralded playwright Sam Shepard and James Stock to the stage over the years.

But this is also an organization with heart. The Open Fist Theatre Company is active in community outreach, working to provide food for the hungry during the holidays.

If the titles, “7 Redneck Cheerleaders” or “Underwear for Christmas,” make you giggle ’til you pee, then you probably want to check out the Elephant Theatre Company (6322 Santa Monica Blvd.). This non-profit collective of 75 members was created back in 1995 and originally lived in a space that doubled as living quarters for its founders.

After a growth-facilitated move in 1997, this company relocated to its current home. Here, productions are put on not one, but four working stages.

As for its unusual name? Well, it turns out that Open Fist isn’t the only space inspired by Sam Shepard. The folks at Elephant took cues from the writer and borrowed the name from a quote by this American talent.

The Complex (6476 Santa Monica Blvd.) is another great stop on a play-junkie’s quest for entertainment. This collective of stages is currently running everything from the irreverent to emotionally challenging works by theater’s finest. Plays like “Gonnabes and The Nothing Boys” have left audiences raving.

Still, one of the coolest things about The Complex is that it’s accessible to all kinds of artistic media. Filmmakers can rent space for their projects. The Complex also hosts plenty of screening space for those who don’t have the bucks to shell out for a pricey movie premiere.

If you’re a young playwright looking for resources – and by resources, I mean massive ego stroking – then you will surely find birds of a feather at the Blank Theatre Company (6500 Santa Monica Blvd.). The Blank is the foremost authority on displaying the works of talented unknowns from all over the country.

Admission to its 2008 Young Playwrights festival is currently available for sale to the public. Instead of waiting until Broadway (or off-Broadway) gets a hold of tomorrow’s star, why not do a little discovery of your own? Or in the event that you believe in supporting the arts, this space is open to fans and art-lovers coming on board as volunteers.

And who knows ... you just might run into someone like actor Noah Wyle (John Carter from “ER”). He just happens to be the company’s Artistic Producer.

Artworks Theatre (6567-6583 Santa Monica Blvd.) is an 84-seat space with loads of amenities for those who really wish to get their feet wet on the grand stage. Its adjoining arts center is host to not one, but two studios available for renting. That means anyone with a story to tell now has a centrally located space in which to perform.

For plays with a cause, Celebration Theatre (7051 Santa Monica Blvd.) is the way to go. This stage prides itself on offering the finest in fair, accurate and dignified portrayals of the gay and lesbian community.

Director Michael Matthews recently won raves for the play “Stupid Kids.” So celebrated was this work, that its run was extended through early April of 2008. This theatre’s vibe is edgy with just enough sex appeal in the air to keep it interesting.

The Village at Ed Gould Plaza (1125 N. McCadden Place) is another spot for gay pride in the city. Community activities are frequently held here. Wednesdays belong to a film series, which nets some of moviemaking’s greatest.

But it doesn’t stop there: you can take classes of all kind here. Everything from aerobics to computer classes can be found on these grounds. And for 12-steppers, there are even support meetings to help through the rough times.

Although the National Comedy Theatre (733 N. Seward St.) was founded in Los Angeles in 2000, this millennial stage has showcased the improv stylings of ComedySportz for humor fans throughout the area. This space has a rich history, too.

Many a famous name has come here in hopes of making it onto the roster at HBO’s U.S. Comedy Arts Festival, and it even served as a photographer’s studio. Sure, it’s not located on Santa Monica Boulevard, but it’s still a proud part of the row.

When “Inside Private Lives” debuted at the Lex (6760 Lexington Ave.), the L.A. Weekly named it “Pick of the Week!” That’s a huge distinction for Theatre Row. Especially for a play that showcases controversial figures of the 20th-century such as Branch Davidian leader David Koresh and baseball’s resident bitch on wheels, Marge Schott.

What makes the Lex a blast is its friendly people and affordable concessions. As an added bonus, it offers wheelchair accessibility so that everyone can enjoy the work here.

And don’ forget the Unknown Theater (1110 Seward St., Los Angeles), which houses various unique theatrical events throughout the year. This place attracts an über cool crowd and has been known to offer free beer and comedy after paid-for performances.

While it’s true that Los Angeles is the home of film and television, those who are truly in love with acting – not fame – have made a home for themselves on Theatre Row. Now it’s up to the public to see to it that they have an ever-adoring audience to feed the beast.