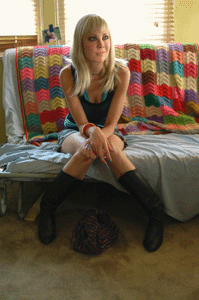 Anybody that has spent more than 48 hours in Sin City knows that the worst thing about the place is trying to find non Cirque du Soleil and lagoon pool things to do with the sweltering daylight hours. But starting this week, visiting Angelenos will have an added reward for the five-hour drive: the CineVegas Film Festival.

For 10 years, CineVegas has provided a two-week celebration of unique films that take risks and push the artistic limits of filmmaking in the very city that invented risk-taking and pushing artistic limits – fabulous Las Vegas. Held at the Palms Casino Resort, the festival is known for evocative documentaries, in-depth celebrity tributes and highlights in local film; and is a great excuse for an extended desert vacation.

Movies like Big Heart City and Cocaine Cowboys II: Hustlin’ with the Godmother are separated into categories like “Sure Bets,” “Vegas Uncovered,” “Area 52” and “Jackpot Premiere.”

The documentary categories, however, have the most eye-catching offerings. From a portrait on New York’s infamous Chelsea Hotel to a world premiere look at the life of Phoenix art scene’s “clown prince,” Ryan Avery, CineVegas’ documentaries explore new territories and find stories in the unexpected.

Fill your nights up with public intoxication, but save the days for hung-over movie watching because even though Hunter S. Thompson feared and loathed in the place, you’ll be loving every second of the city of sin (straight through a documentary on Thompson that’s almost as crazed as the man himself).