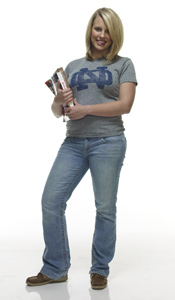 In anticipation of Paramount Vantage’s July 25 release of American Teen, Campus Circle asked each of the film’s five “teens” to sound off about college life and their particular areas of expertise. Below, Megan Krizmanich shares her experience as a pre-med student embarking on her junior year at the University of Notre Dame.

Most five-year-olds live for the trips to the zoo, recess, their favorite afternoon cartoon; I yearned for ER pages, making rounds, trips to the doctor’s lounge – any excuse for me to tag along with my dad to the hospital. All the nurses knew my name and often provided me with a stethoscope and tongue depressor so that I could perform my weekly check ups. I fell in love with the thought of helping people and decided at a very young age that it was what I wanted to do for the rest of my life.

Fast forward 15 years, I still hold tight to my dream of helping people by becoming a doctor studying medicine at the University of Notre Dame; but my happiness that stemmed from my stethoscope and tongue depressor has been replaced with stress from organic chemistry and MCATs.

All pre-med students know their mandatory pre-requisites and have their college schedules mapped out by the end of freshman year, jamming as many credits into each semester. But being a pre-med student is more than just a set of courses needed to get into medical school; it takes over your life and becomes more than a classification, it’s a mindset.

I learned that 50-percent was an acceptable exam grade and became completely dependent on the “grading curve,” which pins one student up against the next. This system forces students to be selfish and never stop to think about classmates because when they’re doing well it means that you’re doing worse.

The classroom is no longer an atmosphere focused on learning, rather on competition. Yet there’s no time to worry about competition.

Being pre-med and having 18 to 19 credit hours each semester requires a fair amount of time devoted to classes. However, so many pre-med students become so intent on doing well and maintaining a high GPA that they limit themselves and focus on what they need to get by, the bare minimum. Students no longer strive for understanding of a problem, but crave only the way to get the answers and their desired grade.

Do most physicians use organic chemistry during their careers? The answer is no.

Studying medicine is a test of endurance. I have my doubts, but then I picture my five-year-old self in oversized scrubs, and it reminds me that I have a passion to help people, and this reassures me that I was sent into this world to be a doctor.