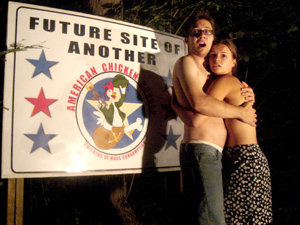 The folks at Troma Entertainment have done it again with Poultrygeist!

It would be easy to say this is a disgusting bloodbath of a film that dwells on the fact that it’s bad just for the sake of being bad. It does.

That’s what Troma is known for, and fans of the genre will not be disappointed. Lloyd Kaufman, one of Troma’s co-founders, directs this one – and it’s their best yet.

Folks that are not familiar with Troma’s unique take on filmmaking, however, may want to do a little research before tackling this flick. It is crass, vile and disgusting. It’s also hilarious.

The premise is a fast-food, chicken franchise that’s built on an Indian burial ground, which leads to the attack of zombie chicken people. This farce showcases every variation of being grossed out that you can think of and a few you wish they hadn’t!

Troma films are an acquired taste. This one is no exception. This is not for people with weak stomachs or nonexistent senses of humor!