Pointed Penn: Just Don't Ask Him to be Happy about his Success 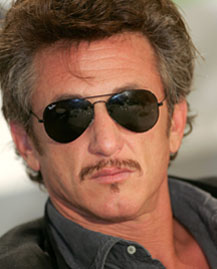 What, exactly, is Sean Penn’s problem?

Here’s a guy who, at age 44, has won virtually every award a movie actor can win, including the Academy Award.

And since 1981, when he made his screen debut in Taps, he has worked steadily – averaging more than a picture per year and collaborating with such top-notch directors as Clint Eastwood, Terrence Malick, David Fincher, Oliver Stone, Woody Allen and Brian De Palma.

Penn also has managed to direct a few films himself. And as long as we’re counting his blessings, let’s not forget that he’s married to the lovely Robin Wright Penn and that they have two presumably wonderful children.

Yet Sean Penn never looks happy. In fact, he usually seems about one bad hangover away from carrying out a suicide pact with the "Phantom of the Opera."

"He is maybe the only actor now who, in interviews, can summon up the tortured introspection of the early Method actors without irony or shame," notes film historian David Thomson in The New Biographical Dictionary of Film.

Can this really be the same person who made everyone laugh with his hilarious portrayal of Jeff Spicoli, the quintessential no-worries stoner of 1982’s Fast Times at Ridgemont High? These days, Penn more often seems like he’s popping downers.

Ask him a question – even a total softball – and just see what happens:

Hey, Sean, would you like to be remembered more for your art or your politics?

Wearing shades and a thin mustache, Penn certainly looks the part of the angry, slightly weary, middle-aged man. During a press conference for his latest film, The Assassination of Richard Nixon, he keeps those shades handy while he chain-smokes.

Penn’s angst-ridden image is often a drag. But it may have added a certain fizz to his work in such films as Casualties of War, in which he played a vicious Vietnam-era soldier, and Mystic River, for which he earned his Oscar by portraying an ex-con with a chip the size of a cell block on his shoulder.

Penn’s bad-boy vibe also turns out to be a plus in The Assassination of Richard Nixon. In this dark, fact-inspired drama, Penn plays Sam Bicke, a salesman who attempts to kill the 37th president of the United States by hijacking a plane and flying it into the White House.

Like Penn, Bicke is a desperate character who thinks of himself as a decent person. An inveterate loser, Bicke suffers from paranoia and delusions of grandeur that seem only a step or two beyond whatever’s eating Penn.

When Penn speaks about Bicke, however, he tends to draw other comparisons.

"It’s not hard to find people in my life who I’ve had thoughts (that) something bad might happen to," he reveals. "So there might be a rhythm or two borrowed from a couple of pals."

The script for the new film caught Penn’s eye before Sept. 11, 2001. But, since then, he has been increasingly struck by what he calls the "incredible parallels" between the attacks of that day and the attack that the real salesman (whose name is actually spelled "Byck") attempted in 1974.

"Knowing about this story made watching people like Condoleezza Rice kind of amusing when she said ‘Who would have ever thought’ – other than the FBI and the CIA and the Secret Service, who all have this case on file and study it," says Penn, with bitter relish.

The edginess of the new film seems to have inspired Penn to throw himself into this project. In fact, Niels Mueller, who directed and co-wrote the film, says that the actor’s unrelenting commitment is the main reason that, after five years, it finally got made.

Beyond that, Mueller implies that Penn often functioned as a sort of co-director.

It was Penn who suggested Naomi Watts for the role of Bicke’s estranged wife (he made 21 Grams with her). And when Mueller ran into problems directing the film, he’d often ask Penn for advice.

In some scenes, in fact, it was Penn who actually operated the camera.

"We wanted to keep this film from Sam’s point of view, as much as possible," Mueller explains. "When he points the gun at the irate customer, Sean’s holding the gun and he’s holding the camera. Not an easy task, by the way. The camera’s heavy."

Having taken so much responsibility for The Assassination of Richard Nixon, is Penn at all concerned that the movie could encourage copycat violence? For once, he doesn’t miss a beat.

"I’m a believer that society has to deal with its issues without the scapegoat of movies giving somebody the big idea," he says. "The story of a twisted head on a basically good man is a valuable story. And the results of what happened are more dangerous not to look at than to look at."