The Black Keys: Get Yourself Some of Their ThickFreakness 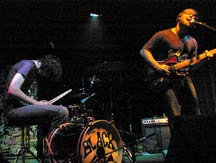 Dan Auerbach, who plays guitar and sings for the Akron, OH-based dirty-blues duo The Black Keys, seems to be a pretty patient guy. When I tell him that I’ve only recently heard of his band, he laughs it off. And when I ask the questions that he’s inevitably heard ten-too-many-times ("Do you think you sound anything like the White Stripes") he politely answers with tight, short sentences that subconsciously mimic the minimalist arrangements of his band’s songs.

But ask Auerbach about musicians he hates, and——after hesitating, just long enough to sound inoffensive——a rant about a certain Canadian diva begins. "It’s sickening shit," he says. "She’s in a fucking car commercial," he continues. "It’s like a fucking parody. Everything she does is like a ‘Saturday Night Live’ skit."

It’s probably safe to conclude from the conversation that Auerbach doesn’t want a stadium built for him in Las Vegas. It’s too bad, though——the world could do with a little less overblown belting and a little more of the rowdy rock that Auerbach and his musical partner Patrick Carney create. The Black Keys’ music finds the missing link between Otis Redding and the Jon Spencer Blues Explosion in raunchy, old-school bites of garage-soul trash-rock.

ThickFreakness is the band’s second album; its release date is April 8, the same day that The Black Keys headline at Spaceland. Though they’ve been playing in their basements since ’96, their debut came out less than a year ago. ThickFreakness should only help to increase the buzz that’s been building since then.

Auerbach’s family definitely has something to do with the Black Keys’ familiar yet far-from-generic sound. "I was raised around a lot of blues music. My dad had a cool record collection, and introduced me to a lot of that kind of music, and my mom’s family, they all play instruments," he says. "Pat’s dad was also completely into music——a big fan of Otis Redding, and Al Green."

In fact, Auerbach can’t even reach far enough back to recall his first musical memory. "It’s just always been there," he says.

Perhaps that’s why history is so imbued in his howl, a convincing, melodic roar that’s as Deep South soulful as a white boy from the Midwest could hope to be. It was also probably a convincing factor for Sleater-Kinney, who handpicked the band to open a U.S. tour earlier this year. "Jimi Hendrix could have been on stage and they wouldn’t have given a shit," Auerbach says of the band’s devoted fans. "A lot of those people could give a shit about anybody but Sleater-Kinney."

Still, the band didn’t compromise to please the crowd. "We don’t have any schtick, we don’t have any bullshit. If people like it, they like it. I think we gained some fans [from that tour], and it was a completely positive experience."

But for a band that tours as hard as the Black Keys ("We’ve been gone at least three days a week for the last five months," Auerbach says, unflinchingly. "It’s hard"), it’s all about the show. "Once we get onstage and start playing, everything kind of just fades away." Auerbach also loves an interactive crowd. "The more we let loose, the more they let loose," he says. "We’re not just onstage like a television show for people to stare at. It’s a give and take thing."

Sounds like a recipe for a great show: one part audience call-and-response, one part garage rock, and two parts distorted blues. Just make sure you don’t invite Celine Dion to stir it up.