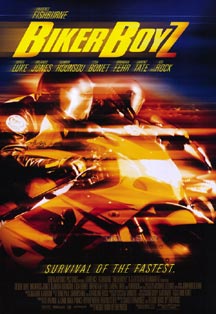 We’ve seen the plot a million times before in Hollywood films. A teen loses his father and seeks revenge against the person that he believes is responsible. They give this plotline as a template in all screenwriting programs, and have syllabi and step-by-step courses on how to write it in film school.

With such a juicy New Times story (by Michael Gougis) about L.A.’s inner city underground bike racing scene, why did director and co-writer Reggie Rock simply go on autopilot with the script? With the subject of Black and Latino bike gangs right at his fingertips, he only manages to give moviegoers a taste of flavor, when he had the opportunity to present a seven-course meal.

Young Kid (Antwone Fisher’s Derek Luke) wants to overthrow the King of Cali, who goes by the name of Smoke (a rugged-looking Laurence Fishburse). It turns out Kid’s daddy Slick Willie followed Smoke around more like a demoralized grease monkey in his son’s eyes than a right-hand mechanic.

Kid forms his own bike club, the pussyfied-named Biker Boyz, to take the racing throne from Smoke, even though his father was in the wrong place at the wrong time when a speeding bike flew off of the street one night.

The caste systems and parlimentary procedure of the bike clubs come out in full colors, but Bythewood is more concerned with father-son bonding B.S. in an attempt to make this flick really stick.

But kudos to the director, his tech crew and the actors and real-life clubbers who show off some wicked burnouts, wheelies and other wild stunts without the help of CGI. While Boyz’s obvious comparison, The Fast and the Furious, was a technical marvel, it cheated by using slick computer imagery to give it a clean look.

Where Biker Boyz does succeed is in the rawness at its core, and a chip on its shoulder to boot, knowing full well it’s a $20 million budgeted film that looks more like it cost three times that amount.

The acting by all the players is fun and loose, especially by Luke and the club’s Greek chorus, Orlando Jones, who proves he’s come a long way from those 7-UP commercials. Also notable is Kid Rock, who manages a respectable performance as another American Bad Ass.

You can sense this film was just one big guerilla shoot, with a barbeque on the set every night just to keep up morale. Too bad we’re stuck roughing it on the plotline as well, or we might have had a good biker movie. Instead, it’s a Rebel Without a Original Thought.