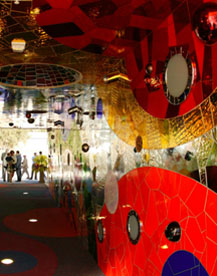 It wasn’t the Rose Bowl that had thousands of screaming fans flocking to Pasadena late last month. Well, it was. But it was also the grand opening of the Kidspace Children’s Museum, now located beside the Bowl in Brookside Park.

This new kinder space asks, ‘Where else can kids dig, learn about fossils and the evolution of earthquakes, ride trikes and climb 40 feet into the air?’ I would have answered some elite pre-school in Malibu, but the museum’s press release assures me that "they can do it all at the new Kidspace Children’s Museum, the only Los Angeles-based museum committed to creating exhibits and programs in the arts, sciences, and humanities that promote exploration, investigation, and expression."

Before the tsunami tragedy, the museum was touting its signature exhibit, an earthquake recreation where children can "set off" a tectonic shift. While pseudo-destruction from earthquakes may feel "too soon," the child I went to the museum with said she was more afraid of a tsunami occurring in Los Angeles before, literally, grasping it at Kidspace.

Terrified before, this 9-year-old was able to "master" her fears by manipulating a world that she felt manipulated her. This is one of the museum’s most influential features – with children usually at the whimsy of the world, at Kidspace, they’re in charge of it. Like me playing He-Man as a boy, they become Masters of the Universe.

Of course, there’s also some pandering. I know I wasn’t the only kid who wanted to become an entomologist (ant-omoligst as I used to call it), and Kidspace knows this as well. I couldn’t help regressing at the Bug Inn, which has large-scale objects – a wall of pencils, tables made of bottle caps – to simulate a bug’s point of view. That my 9-year-old companion spared a spider from the bottom of her Converse on the way out was well worth the $8 ticket fee.