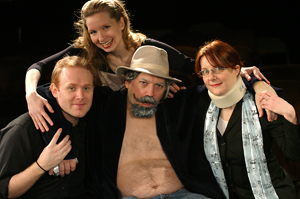 I knew nothing of 1995’s Showgirls or its writer Joe Eszterhas before stepping into this show. Now, I’ve got to see the film ASAP. UCB proudly presents an evening with Mr. Eszterhas, as he slumps on his stool, drinking, smoking, cussing, and is interviewed by film historian and feminist, Jackie Flynn Clarke.

Clarke loves the film and is thrilled to delve into the mind of Eszterhas to reveal his motivations behind the dialogue and action in the raunchy saga. A troupe of UCB players act out the scenes as Clarke’s husband reads the staged directions.

We even get a peek at Elizabeth Berkley and Kyle MacLachlan’s wild sex-in-the-pool scene from the movie. Rob Corddry (Semi-Pro, “The Daily Show”) cameos. What I was left with: I have to rent Showgirls!