Phantom Planet: Do the Monster Mash 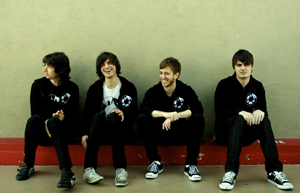 Given the words “Raise the Dead,” thoughts of ghostly cemeteries and zombies cracking from their tombs come to mind, which just may be the atmosphere Phantom Planet intends for their latest release of the same name. Alex Greenwald, lead singer and songwriter, found unexpected inspiration from a scary group of fiends.

“I studied a lot of the 20th century cults and their music – from Charles Manson, David Koresh and Jim Jones,” says the frontman. “What I realized was that if you listen to the songs apart from the circumstances that surrounded their eventually horrific outcomes, their music takes on a completely different, and actually hopeful, joyful meaning.”

Could this be the same band that brought us the snappy, can’t-help-but-sing-to pop ditty “California,” the theme song from Fox’s “The O.C.”? The popular teen drama couldn’t help but introduce some of their fans to the band’s music, however, long-standing Phantom Planet fans know them to be light years beyond the song, with lyrics that run deep, music that is raw and, dare it be said, slightly ahead of its time.

“First and foremost, he doesn’t condone cults at all, it has nothing to do with that,” as bassist Sam Farrar chimes in on Greenwald’s defense. “He was fascinated with the contrast of it. A lot of the lyrics he wrote for this album he designed so when you listen to it one time, you think one thing and then you go back, [listen again] and get a different point of view. He loves double and triple entendres.”

“I tried to force the listener to interpret them as saccharine on one listen and sinister the next,” says Greenwald with a devilish grin.

Such is the bipolar nature of the album, going from the danceable “Do the Panic,” and the upbeat melodies of “Leave Yourself for Somebody Else,” swinging to the melancholy “Quarantine” and haunting air of “Demon Daughters.” All in all, the band continues to bring their rough-around-the-edges rock to the public, with Greenwald’s loose vocals that hit from high to low to screams, wrapped in a blanket of juicy melodies.

It took four years for the band, with guitarist Darren Robinson and drummer Jeff Conrad completing the foursome, to release their fourth album, Raise the Dead. Greenwald admits to writing more than 120 songs for the disc, eventually paring down to the final 12, hoping the proverb “good things come to those who wait” rings true for their latest collection.

And was it just a creepy coincidence that their former tour mates the Zombies were a major influence for their latest cauldron of tunes?

For those who haven’t dug deep into their parent’s record collection, the Zombies’ biggest hits include “Time of the Season” and “She’s Not There.”

Currently on the 2008 Honda Civic Tour with Panic at the Disco, Motion City Soundtrack and the Hush Sound, Farrar adds parting words about being the opening band for the tour.

“We play at 7 p.m. everyday! It’s still light outside, which is so not rock ’n’ roll,” he says with a laugh. “But the kids show up at 6 p.m., and the whole place is packed by the time we play. They’re listening with open ears, screaming and having a good time.

That doesn’t sound so scary, does it?

Raise the Dead is currently available. Phantom Planet will perform June 14 at the Honda Center, Anaheim.