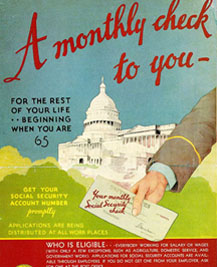 Social Security has long been considered the deadly "third rail" of American politics – too dangerous to touch, because it’s so popular. But President Bush has grabbed onto it with both hands

In a move every bit as bold as Franklin D. Roosevelt’s plan to create a financial safety net for older Americans, Bush wants to overhaul the program by giving younger workers a chance to invest part of their Social Security taxes in the stock market and other investments. Details are still under discussion within the White House, but the proposal has already started a fierce debate that is expected to dominate Congress this year.

The stakes are huge. Nearly 48 million Americans, and nearly every American 65 or older, will receive Social Security benefits this year. The benefits will total more than $500 billion. About 20 percent of older Americans rely on Social Security as their sole source of income. Every wage-earner pays 6.2 percent of his income up to $90,000 in taxes to support Social Security; employers match it.

Nearly everyone agrees that Social Security will face unprecedented financial strains in the next few decades as the baby boom generation – those born between 1946 and 1964 – settles into retirement. More retirees and longer life spans will put an ever-increasing burden on the workers and employers who pay wage taxes to fund Social Security benefits.

The crisis point is still years away, sometime near the middle of this century, but Bush wants to begin dealing with it now. He would let younger workers keep some of the money they now pay in wage taxes to invest in stocks and bonds for their own new personal retirement accounts. But every dollar in wage taxes that goes into those accounts would be diverted from paying for Social Security benefits for today’s retirees.

Critics say the president’s plan would undermine Social Security and put retirees at risk. Others question the need for sweeping change in a program that has worked well for 70 years, that will remain in surplus until 2018 and that will be able to pay full benefits under current projections until 2042, according to Social Security’s trustees, or 2052, according to the non-partisan Congressional Budget Office.

The debate is not about whether to keep Social Security or jettison it. It’s about how to shore up a program that has become an essential part of American life.

What you need to know

Here are answers to some basic questions about the Social Security debate:

Q: What is Social Security?

A: One of the bedrock programs from Franklin D. Roosevelt’s New Deal, Social Security provides monthly payments to retirees, disabled Americans and the survivors of deceased workers. Social Security expects to pay $509 billion in benefits to 48 million Americans this year. The average monthly retirement benefit is $955.

Q: How does it work?

Q: So what’s the problem?

A: The system has more than enough money now, but the aging population means that the day is coming when payroll taxes will no longer cover benefits.

Q: When does Social Security run into trouble?

A: The Social Security Administration estimates that taxes will fall short of benefits in 2018. The nonpartisan Congressional Budget Office says it will happen in 2020.

Q: Does that mean that Social Security will go broke by 2020?

A: No, because payroll taxes exceeded benefits for years, the government invested each year’s surplus funds in Treasury bonds held in what it calls a "trust fund." Social Security will cash out those bonds, enough to pay full benefits until 2042, according to the system’s actuaries, or until 2052, according to CBO’s calculation. Once those bonds are exhausted, payroll taxes will cover only 73 percent of now-promised benefits.

Q: How do we know that the government will cash those bonds to pay Social Security benefits?

A: Treasury bonds are backed by the full faith and credit of the United States government. They are considered the safest investment in the world.

Q: If Social Security can pay full benefits until at least 2042, what’s all the fuss about now?

A: The sooner Congress deals with the problem, the less expensive it will be to fix, because small changes can yield larger returns over time. Still, not everyone shares Bush’s sense of urgency.

Q: How would Bush solve the problem?

A: Bush has not filled in all the details, but he wants to give younger workers the option of investing part of their payroll taxes in the stock market or other investments. In theory, higher gains from those investments would provide more security for tomorrow’s retirees. He is also expected to call for slowing the growth of future benefits.

Q: What are the pros and cons of Bush’s approach?

A: Workers would have more control over their own retirement plans and could reap bigger returns. They also could pass their retirement savings onto their children. The downside is that investing in financial markets also means more risk. A sharp stock market decline could wipe out retirement nest eggs. And shifting to a partially privatized system could cost as much as $2 trillion over 10 years – and more after.

Q: Why does it cost so much to shift to a partially privatized system?

A: Every dollar in payroll tax that Bush would divert into a personal account would be one less dollar to pay for retirement benefits under the current Social Security system. The federal government would have to fill that gap. Bush says the government can borrow the money, but critics oppose adding to the federal debt.

Q: Are there any other options?

A: Yes, but none are popular. Raising payroll taxes or reducing future benefits are always options. Congress could also peg benefits to income, scaling back payments to wealthy Americans.

Q: Will Bush have his way?

A: It won’t be easy. Democrats are overwhelmingly opposed to diverting wage-tax revenues from Social Security, and many Republicans, reflecting their constituents, are wary of changing one of the most popular government programs.