The Cool Kids: The Bake Sale 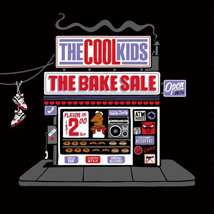 The Cool Kids, Mikey Rocks and Chuck Inglish, have finally released their long-awaited EP, and despite being barely old enough to buy cigarettes, they’ve made the most authentic debut hip-hop album in years. The Cool Kids’ sound is a mixture of upbeat grime and ’80s party rap.

They keep it entertaining with their lyrics about bikes, shoes and how “cool” they are; things Kanye West would probably rap about if he were still a teenager. The beats are reminiscent of select Neptunes tracks with their simplicity and hard hitting bass lines.

Most impressive is their appreciation for the greats that came before them, even though most were rocking before these two were even born. Though, I’m still skeptical of their self-proclaimed title as “the black version of Beastie Boys,” the Cool Kids’ first outing is gold, filled with plenty of club bangers (“Black Mags”).

The Bake Sale is currently available.