The Slackers: Self Medication
(Indication) 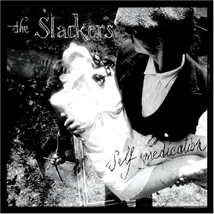 “Every day is Sunday when you’re unemployed.” What a great line to start off a song and an album when your band’s name is the Slackers.

Singer Vic Ruggiero makes it clear on “Every Day is Sunday” that sitting around is no fun, a little boring even, a fact belied by the carefree ska melody the rest of the Slackers wrap the song in. Most of Self Medication strikes a similar chord; the lyrics are moody but the music is upbeat and very danceable.

Perfect examples are “Don’t You Want a Man Anymore,” a reggae tune about broken love that’s impossible not to sing along to and “Don’t Forget the Streets,” a “Pressure Drop”-like reggae rocker that sounds like something the Rolling Stones might have cranked out in a smoky Kingston studio, Ruggiero drawling out his lines like a young Mick Jagger.

The Slackers are not as boisterous as many groups that work the Jamaican sound, possibly because they’ve kicked the gong around with the best, having been mentored by Jamaican greats the Upsetters and the Skatalites.

Self Medication is currently available.