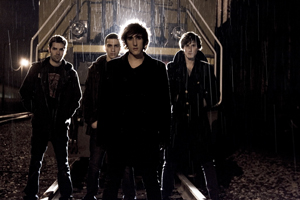 You can find at least 100 new bands on the Internet in one day. So, how does a group stand out?

Most try flashy pictures and tons of graphics, but that slows the page down and looks cluttered. Worst of all, the music is always the last thing to load. So, how can you get the one thing that matters – the music – to the people if they don’t even stay for that long on your page?

In researching Carlotta, I got to know the band based on their online presence. Within a few hours I knew where the band is from, their influences, their habits. They have more media available than most big bands.

And the music is pretty good. Not because it’s catchy and fun, but because the arrangement of the songs have substantial depth.

For a band just out of high school, they really grasp the concept of making good music fun. Their songs range from dance-y jams that combine the sounds of Hot Hot Heat and the Killers to slow ballads that layer piano over guitar with subtle lyrics and a great voice.

Their two music videos are fairly entertaining, as are their video blogs from the road touring with Saving Abel. The band gives you a chance to see them on their own terms, not as a marketing package that a company put together.

By being in touch with their fans, they let people really feel the music. A fan can understand why they’re screaming about love and catch the inside jokes in the videos.

Carlotta aren’t the only guys to do it, but they’re doing it right. Keeping their image clean and fun, just making music and playing shows – it doesn’t need to be more complicated than that.

And what about the live show? That’s a huge component of the band as well.

They’re all over the stage, dancing and belting out songs that sound just as good as the recorded versions. Their energy is contagious as they throw mic stands to the ground and get the crowd to sing along with them.