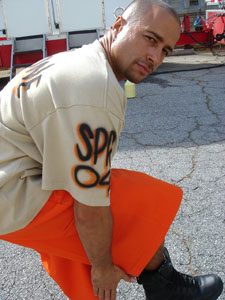 Chuck Maldonado could be the man of the night at the second annual Choreography Media Honors, which celebrates the creators of memorable dance routines in film, television, commercials and video. He has most of the categories covered, with nominations for his ad with the Brighthouse Network, the 49th Annual Grammy Awards, the 2007 NAACP Image Awards and, of course, his breakthrough choreography for Stomp the Yard.

Fifteen years ago, however, Maldonado would’ve never believed he’d be one of America’s premier choreographers.

After graduating from North Carolina A&T State University with a Bachelor in Marketing and a Masters in Education, he taught high school Spanish in Atlanta. But he always loved to dance.

When the Olympics came to ATL in 1996, he auditioned to be a dancer for the opening ceremonies. When they called back, instead of simply offering him the dancing job, they said, “I want you to choreograph a routine for 400 people.”

“This was my first major choreography job,” he says, “but I thought it was a one-time deal.”

Eventually he decided to host a dance show and invite local celebrities to judge, including TLC’s Lisa “Left Eye” Lopes.

“After the show, Lisa was impressed,” he relays. “She pulled me aside and said, ‘if you can do this with young people with no formal training, imagine what you can do with professionals. Maybe you should be a choreographer,’” Maldonado remembers.

And so he did, and finally made the move to Los Angeles in 2001.

Maldonado is currently on tour, teaching step routines like the one he choreographed for the season finale of “America’s Best Dance Crew.” He was also featured in the most recent Indiana Jones installment and was the silhouette in those memorable psychedelic iPod commercials.