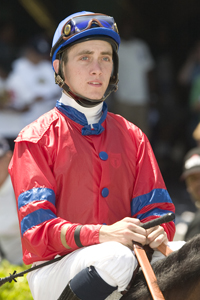 While horseracing has often been referred to as the “Sport of Kings,” it is probably known more simply as the sport of horses. However, it is rarely, if ever, considered the sport of jockeys. While most people can name at least one, if not a number of the Triple Crown winners over the years (War Admiral, Secretariat and most recently Affirmed in 1978...) what they can rarely tell you is the names of the jockeys that were riding those horses as they came across the finish line (...).

After meeting 21 year-old jockey Michael Baze at the Hollywood Park Racetrack in Inglewood, I have no idea why that is.

Whether you know it or not, in the world of riding the family name Baze is synonymous with winning. While Michael continues to add to that tradition with his recent riding title at his home track of Hollywood Park, he didn’t grow up hoping to follow in his father’s footsteps.

In fact, he didn’t grow up around horses at all. But when Dennis Ward, an old friend of his mother, called him on his 15th birthday and asked him if he wanted to come down to California and go for a ride, Michael quickly took him up on the offer.

“When you first start, the more horses you ride the better it is because you just keep learning and learning.”

During his training at Del Mar, Ward and former jockey Jose Corrales would often sneak the underage Baze on to the track in order to get in time teaching him how to tame the large animal. Two weeks after his 16th birthday, his first ride to the winner’s circle proved that the time had paid off.

From there Baze spent almost a full year on the New Jersey racing circuit, learning all he could about what it took to be successful rider. He returned to the California circuit the following year and quickly became one of the rising stars of the sport, ranking 17th in national earnings last season as he lead the way at Del Mar, Hollywood Park and Santa Anita alongside cousin Tyler.

However, his triumph has not come without tragedy. Last summer Michael was thrown from his horse as it broke down at Del Mar following a strongly contested final turn during the first race of the day.

Though Michael was carried off on a stretcher and sustained minor injuries, he returned to the track later that day to ride three more races. His horse, Lyrical Sound, had to be euthanized on the track.

Along with the fear of injury often comes the fear of a sport that is disappearing from view. While access and interest to the sport has grown with the new age of satellite television and Internet betting, fewer people are being drawn to the track because of it. Smaller crowds are making it harder for the jockeys to get fired up for the races they take part in.

“Back 20 years ago they didn’t have Internet betting where you don’t even have to come to the track. It’s like having a baseball game, but everyone is watching on TV. You don’t have a crowd.”

After becoming the youngest jockey in 50 years to win the riding crown at Hollywood Park, Michael is hoping that his success, along with the success of this year’s Triple Crown will be able to reinvigorate the Sport of Kings. With the Breeder’s Cup being held in California the next two years, Michael should have no problem making a name for himself as one of the best jockeys in the country.

Though he says it’s “mostly the horse,” it takes a special rider to be as successful as he has been.

“I make my own way. Some people might have expectations, but I just live up to my own.”