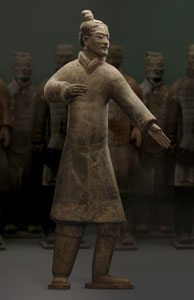 Note to all aspiring screenwriters out there (and if you’re reading this in Los Angeles, that’s you): this is a wonderful idea for a script that, as of publication, hasn’t sold. So get to the Bowers Museum before Jerry Bruckheimer does and get writing.

After uniting his empire in 221 BC, China’s first emperor, Qin, commenced construction on the first Great Wall to keep his enemies out, which also included Death. Obsessed about his mortality, the Emperor experimented with potions to prolong his life. None seemed to work.

But if he were to die, it would be on his own terms: he would rule the afterlife with the army of 7,000 warriors buried beside him. For 38 years, 700,000 laborers toiled to construct a mammoth mausoleum fit for an emperor and his life-sized terra cotta warriors.

These clay statues remained hidden until 1974, when several local farmers near Xi’an, Shaanxi province, digging a well, stumbled across a carved head. Now a UNESCO World Heritage Site, the Eighth Wonder of the World includes warriors, chariots, horses, officials, acrobats, strongmen and musicians varying in height according to their role (e.g., the tallest are generals.)

Even though John Edwards apparently doesn’t have to go through an army of warriors before contacting dead loved ones, might as well hedge your bets and see the warriors now, just in case, so you have something to talk about post-death should Qin have succeeded.