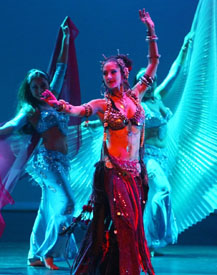 The award-winning, versatile director of VH-1’s "Fools For Love" and "Street Talk," and Showtime’s "The Funniest Person in America," offers the first-of-its-kind documentary about the Bellydance Superstars & the Desert Roses. This behind-the-scenes peek into the evolution of the first bellydance troupe in America premieres in Hollywood this Thursday, Feb. 10 at the Regent Showcase Theatre.

Mr. Brandeis spotlights the troupe’s creator and producer Miles Copeland, warts ’n’ all. The music mogul best known for his management of The Police and Sting is shown as both sweetly passionate and viciously brash in tireless efforts to get his bedazzling stage show off the ground and in the spotlight at landmark music events.

The process of bellydancer auditions to performance adventures at the U.S. Lollapalooza Festival and World Peace Music Awards in Bali, Indonesia, reveals the tenacity and joy experienced by cast and crew. From skeptical audiences to security issues faced by dancers, the troupe had to overcome challenges only diehard professionals could endure.

"Miles thought of the show post 9/11, so it wasn’t the best time," says Brandeis. "He wanted to do a spectacular show, à la Riverdance, to make the music and cultural experience more understandable by the American audience. We learned the phenomenon of how enormous this was in the United States."

Copeland has been adamant in recent years about taking the most talented bellydancers from feeble restaurant entertainment settings to big time stage extravaganzas, and put a new twist on a centuries-old profession. And since this producer is responsible for the advancement of Middle Eastern music artists of his native land through his ARK 21 record label, the double agenda was to showcase the music behind the dancers.

"The music is not snake-charming music. It’s very modern fusion with hip-hop. He represents more of the progressive Middle Eastern music," Brandeis says. "I hope the audience will discover that there’s this thing out there (bellydancing) that’s pretty damn interesting."

The Regent Showcase Theatre is located at 614 N. La Brea Ave, in Hollywood. Price: $10. Tickets can be purchased at the venue, by calling (800) 594-TIXX or by visiting www.bellydancesuperstars.tickets.musictoday.com.