Get Smart: I Spy A Summer Blockbuster 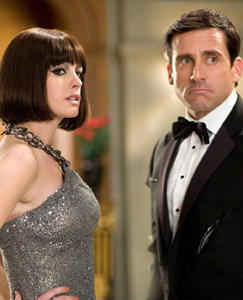 It was a TV hit way back in the 1960s. Spy fare like the James Bond movies was all the rage. Not many moviegoers of today may be familiar with its first incarnation (unless, of course you were a fan of “Nick at Nite” in its early inception). Yet, “Get Smart” somehow solidified itself in the cultural vernacular for decades to come.

Comic actor Don Adams (the voice of the animated “Inspector Gadget”) delighted as the bumbling Maxwell Smart. With his nasally and pronounced voice, he carved out an unforgettable icon of the era. He, along with his mod-to-the-max lady sidekick Agent 99 (Barbara Feldon), fought each week to ward off the evilness of KAOS (a corrupt crime syndicate).

Thanks to Hollywood’s penchant for remakes, this beloved classic is getting a huge makeover on the big screen. Funny man Steve Carell stars as analyst-turned-agent Smart for the film version of the comedy. The Devil Wears Prada’s Anne Hathaway portrays the lethal but luscious 99.

In this version, the good guys (CONTROL) have their identities compromised when the bad guys (KAOS) attack their agency.

What’s a boss to do? Well, the Chief, played by Little Miss Sunshine’s Alan Arkin, pairs Smart up with 99, and the rest, shall we say, is comic history.

The stars of Get Smart reportedly had a blast with one another during production. With talents like Carell and entertainment’s Guy Friday, Dwayne “the Rock” Johnson on board as Agent 23, it’s hard to imagine otherwise.

During a recent press stop in support of the film, both men weighed in on a scene garnering a lot of pre-screening buzz: a kiss between the actors. Carell, forever the jokester, said that the Rock tasted like strawberry shortcake. According to the Associated Press, Johnson countered, “I thought if Jake Gyllenhaal can do it, Will Smith can do it, then I can do it, too. I’m going to own it. I was like, ‘Give me those lips. Right now.’”

Also in the Get Smart lineup are a slew of funny faces that audiences have come to love in recent years. Legend of films and sketch comedy, Bill Murray, shines as Agent 13. With his dry wit and knack for physical gags and sarcasm, Murray lights up the screen.

Masi Oka has risen to fame in just a few short seasons on the comic book-esque series, “Heroes.” His exuberant smile and exclamations quickly made him a fan favorite.

Once again, he stands up for what’s right, helping CONTROL maintain a stronghold on all that’s fair and right in the world. There’s even talk of a spin-off in the works for Oka’s Get Smart character, Bruce.

Another face known to plenty of moviegoers is that of Ken Davitian. He can best be remembered as Sasha Baron Cohen’s obese wrestling partner in the film, Borat: Cultural Learnings of America for Make Benefit Glorious Nation of Kazakhstan. As Shtarker, he is part of team KAOS’s dastardly plan to do really bad things to mankind.

Behind this new adaptation is movie maestro Charles Roven, the super-producer who instigated such successes as 2008’s The Bank Job (with Jason Statham), the Scooby-Doo movies and the much-awaited Batman flick, The Dark Knight (co-starring the late Heath Ledger).

His has been the Midas touch over the years in blurring the line between beloved TV property to potential studio franchise. But the secret to his success just may lie in the fact that many of his projects, as well as Get Smart, are totally foreign to an entire generation.

As a big summer release, 18 to 34 year-olds may be curious about this comedy’s legacy. Meanwhile, fans of the original program are likely to go, apt to weigh in on if its keeps with the integrity of the original.

What’s in store for all these fans, new and old? Expect clever nods to the series.

Carell shares a very similar comedic countenance to Adams. Both are masters of the sideways glance and the humorous outburst.

Also, much like Feldon, Hathaway comes equipped with a very sexy but girl-next-door sort of charm that works as a breath of fresh air at a time when leading ladies look more like Pussycat Dolls than socialites. Unlike her recent rash of films in which she plays the sheepish and somewhat innocent heroine, this time, Hathaway and her sultry glances command some much-deserved attention.

Much has been made of some of the more memorable props from the TV series. Fans may remember the shoe phone in which Adams’ Smart often received communiqué. There were also sprinkles of gadgetry, here and there, that closely mirror many of the technological devices that we hold so dear in this day and age (i.e., the iPhone, mobile phones).

In keeping with the wow factor of the movie, its filmmakers really had to pull out all the stops to keep people excited about the spy and tech devices, while staying true to the modern day. A sure fan favorite will be the Swiss Army knife, with a built-in flamethrower and the all-too-familiar, yet completely awesome, retinal scanners.

Physical comedy also rules the day in Get Smart. Along with cartoon-ish and campy violence are many fun action sequences that not only showcase these stars’ abilities to work well with a stunt coordinator, but prove that they’re giving it all they’ve got.

Get Smart releases in theaters June 20.