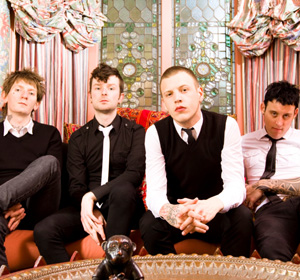 “I want to put on a show where people are kind of intimidated but are still intrigued,” says Beat Union drummer Luke Johnson, in reference to his band’s live show.

And unwitting as it may have been, Johnson may just have found an applicable description of all the anachronistic genre bending that defines his band and its classic-rock-meets-modern-punk style. For the U.K. bred foursome, it has been every bit the uphill battle to break out of their Birmingham hometown, find their place in the modern rock scene and crack into the U.S. market, but this union certainly isn’t afraid of long hours or hard work to get where they’re going.

Having garnered quick buzz that has turned into a growing American fan base, Johnson admits to being taken aback by another country embracing them when their own seemed near impossible to win over.

“It’s weird because England’s kind of turned its back on us. We’ve done many significant, major tours, but we never broke England,” says Johnson. “To come over here and have people talking us up and getting excited about the band is confusing for us.”

It may have been a slow build leading up to the release of their debut full length, Disconnected, but Johnson and his band mates – guitarist Dean Ashton, bassist Ade Preston and vocalist Dave Warsop – are wasting no time when it comes to making their presence known now. With the likes of John Feldmann, who helmed production duties for Disconnected, and Kevin Lyman, who has the band lined up on the entirety of this year’s Warped Tour, singing the band’s praises, needless to say the members of Beat Union are riding pretty high right now.

That’s not to say, however, that they’re entirely worry-free.

With their album drawing comparisons to iconic rockers like the Clash, Elvis Costello and the Police, while they themselves tour with modern scene favorites Alexisonfire, Gym Class Heroes and Taking Back Sunday, the members of Beat Union are indeed honored to be associated with such esteemed musicians of past and present. The problem facing the band lies in reconciling the sometimes-contradicting dichotomy of Beat Union the recording artists and Beat Union the live band.

“The live show is going to be a little more gritty, and I guess sometimes we come off a little more agro, like a raw punk band, whereas the record is a lot more polished. I ask myself if this is going to cause us problems when people see us live, then buy the record and say it’s too polished, or vice versa, where they hear us on the radio then come see us live, and it’s far too heavy for them,” says Johnson. “It’s so hard to gauge when all you want to do is put all your energy into playing and throw everything into the show. I’d give anything to just stand in the crowd and watch our band play.”

While Johnson may be wary of a disconnect between the vibe on the album and that in their live show, the one undeniable constant running between both is the passion he and his band mates bring to their music, something readily apparent as soon as hitting the play button and as soon as they take the stage.

“I think you can’t keep an honest band down, and I believe we’re an honest band,” Johnson says, though he does admit a somewhat greater comfort on stage than in the studio. “The best way to experience Beat Union is live because all you’re going to get is an honest band. We’re not trying to fake anything or pretend we’re bigger than we are; all we’ve got are those 25 minutes on stage, and we’re going to put every last bit of energy into it.”