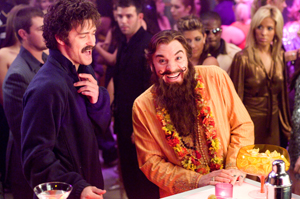 What would happen if you combined Bollywood with Oprah on a hockey rink where a self-help guru goes head-to-head against Justin Timberlake? You would have The Love Guru, Mike Myers’ new film and the introduction of his first original character since beloved international man of mystery, Austin Powers.

Myers plays the Guru Pitka, the second most popular spiritual advisor in the world, trumped only by archrival Deepak Chopra.

The idea has long gestated in Myers’ brain.

“I grew up in Toronto,” he explains. “As long as I can remember there have been Bollywood movies on Toronto TV Channel 47 at 2 a.m.”

An insomniac since the age of 11, Myers found hours of late night entertainment and boundless inspiration.

“It was so different, but ultimately it was Austin Powers,” he reveals. “All singing, all dancing, very bright colors, and I didn’t know it then, because I hadn’t written it yet, but I thought ‘Wow, this is a fascinating parallel universe.’”

That early inspiration proved a boon for later pain.

His Oprah discovery provided comfort and a creative outlet. He began reading Chopra’s teachings and other books on spiritual philosophy.

“But what happened was, my friends would ask me what I was reading, and I would say, ‘This wonderful thing,’” Myers transitions to his Guru Pitka voice, “‘The only way out is in.’ This voice started happening.”

He decided to delve deeper.

Myers continued developing the idea in what has become his signature style, which typically takes three to five years and includes numerous performances of the character and jokes before a script is ever written.

Director Marco Schnabel explains, “Mike spends a long time incubating an idea. He’s getting audience feedback and building a character from the outside in. He takes his silly very seriously.”

“We wrote a stage show, and we did eight or nine of those over [five] years,” co-writer Graham Gordy says. “We really tested the jokes the way the Marx Brothers used to test their material; they would do stage shows and tour them around the country, test the jokes for six months and then put them on film.”

Once cameras were set to roll, Myers reached out to Justin Timberlake.

“Mike called and said, ‘I can think of three other people I could cast, but they just won’t do it the way you’ll do it,’” Timberlake says with pride. “That meant a lot to me.”

More than the ego boost, Timberlake was thrilled to work with a comedic maestro.

“It’s Mike,” Timberlake says with reverent esteem. “If you’re gonna do a comedy, do it with the best. To get to work with him, you walk in saying, ‘Don’t let Mike down!’”

According to Schnabel, Timberlake never had anything to worry about.

“[Justin] was electrifying. The guy is a born entertainer,” Schnabel gushes. “He was a joy to work with, incredibly prepared and constantly looking for ways to make it funnier and better.”

Myers, who has openly admitted to having a man crush on JT says, “Is it a shock to anyone? He’s the most talented human being I’ve ever met.”