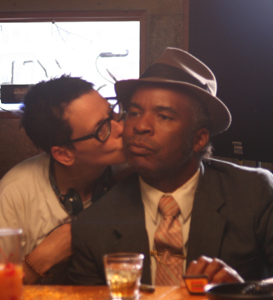 Her father was a minister who beat her mother and terrorized her and her two younger sisters. One day, fed up, her mother fled with the girls, only to end up a prostitute, living in the Poker House, surrounded by pimps, hoes, drugs, alcohol and poverty.

At 14, Petty was raped by her mother’s pimp. In order to get by and raise her two sisters she had to take on various jobs. The Poker House follows one of the worst days of Petty’s life.

Best known for films such as Point Break, A League of Their Own and Tank Girl, Petty now spends her days painting, writing and directing. Debuting at the LA Film Festival this week, The Poker House puts Petty’s past in the spotlight.

“It’s not like I want to tell my story,” Petty explains. “I had to. I didn’t have a choice. It just came out.

“I don’t know why,” the Venice Beach resident continues. “I wrote 10 pages. Three years went by and [David Alan Grier] said, ‘what happened to that thing you were writing?’ He said I think we should finish it. We finished it in a month.”

Playing the 14-year-old Petty (or Agnes, as the character is called in the film) is Jennifer Lawrence, an actress who perfectly captures the nuances of Petty’s persona: her crackly, fast-lipped voice, her tomboyish walk, her sarcastic, playful fun-poking.

“It’s a tribute to what a good actress she [Lawrence] is because she’s the opposite of me,” relays Petty. “She’s a girly, blonde, big [chested], gorgeous girl. She would show up to work in a jean mini skirt, flats, push-up bra and tank. I would say, ‘Jennifer, go back to your room and put on a T-shirt, no bra and sweat pants and come back to work. I said no [to her] at first. She’s a big gorgeous woman. I was looking for a 14-year-old girl.”

Yet Lawrence quickly won Petty over, who now sings the 18-year-old’s praises.

“She was wonderfully open,” Petty admits. “She listened to me.

“No one on this planet will believe me when I say we shot in 20 days,” Petty adds proudly about her first-time directorship.

“Forty-four actors and the lead three characters could only work eight hours per day. Those three girls never forgot a line. When you hold the bar up to a certain height, everyone jumps to that bar. You’re the one to say this is how we’re living right now. Everyone’s happy to live right there.”

Spend any amount of time with Petty and it’s apparent she takes tremendous pride in her film. But does she feel nervous about exposing her troubled past to the world?

“I don’t feel vulnerable or nervous,” she counters.

“I’m telling you right now literally 75 percent of the women who see this film confess sexual abuse to me. And that’s what my character, it happened ... She was raped by her seducer, by the person she thought loved her. That’s how most women get raped, by people that they trust. On the set, it was like this one, that one, even the mothers of some of the actors.”

And what about Petty’s relationship with her mom today?

“I love my mom,” she assures. “We’re totally close. It’s 30 years ago. That’s what happened to my mom. She’s totally down and great now.”

The Poker House debuts at the Los Angles Film Festival June 20 at Mann Festival, and will screen again June 23 at the Landmark and June 25 at Majestic Crest. For more information, visit www.lafilmfest.com or www.loripetty.com.