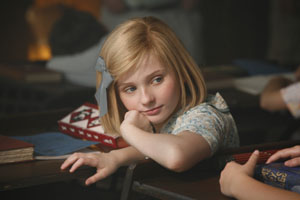 The Great Depression: an era of rampant house foreclosures, bankruptcy and hard times – a time that seems distant, yet strangely familiar. With today’s economic hardships, many Americans are facing similar problems – their homes taken from them, their wallets slimming and their hope for financially surviving slowly dwindling away.

Director Patricia Rozema’s newest work, Kit Kittredge: An American Girl, reminds us of these unfortunate parallels, yet uplifts us with the story of a bright-eyed, compassionate girl who solves a crime in order to save her family and friends.

Living in poverty stricken 1930’s Cincinnati, Kit’s father is forced to leave the city to find work. To survive, Kit’s mother takes in a slew of charismatic boarders – a flirtatious dance instructor, a quirky magician and an eccentric mobile librarian. When someone steals what’s left of her family’s meager belongings, Kit sets out to solve the mystery.

Reminiscent of a Nancy Drew tale but with added humor, depth and meaning, Rozema hopes that the film, which she stresses is a “family film,” not a “kid’s film,” will resonate with adults as well as children. Benefiting from its talented cast, including the beloved Abigail Breslin (Little Miss Sunshine), Joan Cusack and British beauty Julia Ormond, the film pairs quality acting with a well-written script to captivate audiences in a heartfelt story.