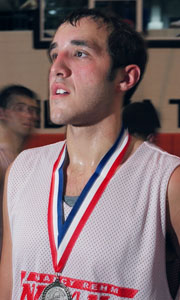 In anticipation of Paramount Vantage’s July 25 release of American Teen, Campus Circle asked each of the film’s five “teens” to sound off about college life and their particular areas of expertise. Below, Colin Clemens shares his thoughts about college athletes. He is a junior business major at Indiana Tech University on scholarship for basketball. This summer, he’ll be interning with the L.A. Dodgers.

Ever since I was a little boy, I have dreamed of being a college athlete. Growing up, I always thought that playing basketball in college would be easy and not much of a challenge. However, I was in for a rude awakening.

There are the pressures of landing and keeping scholarships, more intense workouts, the speed of the game is much faster, the players are stronger and everyone on the team was the best player at their high school. I never even considered those things when I was in high school and learned I’d be playing for Indiana Tech.

The fact that I am a college basketball player is very satisfying to me. I feel truly lucky that I get to play the sport beyond high school, which so many athletes don’t get to experience. Plus, one of the bonuses of being a college athlete is that it helps pay for my schooling.

Another bonus of being a college athlete is that I get to be a positive influence on younger kids from my hometown. Above all, the greatest bonus is that I get to play basketball, the sport I’ve always loved for four more years.

Over the years I have heard some crazy things about athletes: athletes aren’t smart, if it weren’t for sports they wouldn’t be good at anything and athletes think they are better than everyone. I know there are some athletes that fit those descriptions. However, in general, athletes are just like anybody else.

One example of athletes having good grades would be my college team this year. Our coach notified us that as a team we had a G.P.A. of 3.5/4.0. That means as a team we averaged all A’s. Also, in my high school class, seven out of the top 10 students were athletes.

However, it then followed by a loss in the first round. It was a horrible feeling.

So, now my goal is to make it to the tournament and win the national championship. This will hopefully be accomplished before I graduate from college.

The highs and lows of the game constantly strain you emotionally and physically. Athletes cry; it’s not a myth. A loss really hurts – to you, your teammates, your coach and your fans. A win never gets old.

I come from a very heavy basketball town in Warsaw, Ind. It isn’t hard to find some action where I come from during the off-season, when keeping in shape is important.

In my opinion, there’s nothing better than going out and playing. You can do all the drills in the world, but in the end you have to go out and perform the actions.

For those who are interested in pursuing athletics, don’t forget to work hard and never stop pursuing your dreams. I grew up with people telling me I was too slow, too weak and not skilled enough. So, I went out and became faster, stronger and more skilled.