Brick Lane: The Beloved Novel Takes to the Big Screen 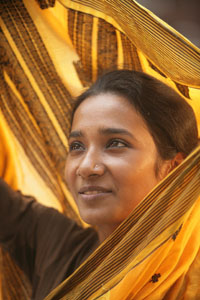 In her eyes is the grace of a woman twice her age. Her smile masks a legacy of suffering sadness. She has given up hope, yet when it finally finds her, she remains open to its charms.

There are so many things that she wants for herself but is unable to stand up for them or seek them out. Her name is Nazneen, and she is played by international newcomer Tannishtha Chatterjee in the drama Brick Lane.

The film is director Sarah Gavron’s adaptation of Monica Ali’s debut novel of the same name. Nazneen’s story is not unique for women in her position.

She lives in a poor neighborhood in London’s West End. She was sent there, nearly 20 years earlier, after the death of her mother, to marry “an educated man.”

Unfortunately, this is not a love match, nor a marriage built on traditional affections. Nazneen misses her beloved Bangladesh and the friendship she had with her sister.

London is filled with monotony for this mother of two. Her daughters see her live each day with worry about money and barely-there contentment. That is, until Nazneen strikes up an acquaintance with a ’round-the-way bloke named Karim (played by Christopher Simpson).

As the two grow closer, Nazneen begins to realize that there is actual happiness and passion in the world. However, things begin to get complicated when her husband and neighbors begin to suspect the affair.

Adding to the pressure is the horror of 9/11, which unfolds and rips through Brick Lane. Her husband wants to take the family back to the old country. But is that really the right choice?

Gavron is a strong choice for such emotional material. As a fan of kiwi filmmaker Jane Campion, she lets her action similarly unfold like the petals on a rose. The scenes are ripe with the lush and saturated colors indigenous to the Muslim world.

“I was immediately drawn to the story and themes of the book, Brick Lane,” admits Gavron. “The challenge of the adaptation to screen was for us to allow the film to explore these themes but to distill the novel. The character of Nazneen was the key to this.”

To see Gavron’s leading lady in person, one would never guess that the downtrodden, 30-something mom on the big screen is in actuality a very modern girl. Chatterjee is a scholar and a world-traveler (she lives in India and Europe).

Despite her serious choice in parts, she jokes that she would love to tackle a comedy next. When asked what kind of characters within that genre she’d like to step into, Chatterjee calls Ellen Page’s turn as Juno truly inspirational.

Chatterjee could very well get her wish. She has been nominated for a number of high profile acting awards including a British Independent Film Award (equivalent to our Independent Spirit prize).

Only time will tell if she will have the staying power of many of her Indian contemporaries (Mississippi Masala’s Sarita Choudhury, “ER”’s Parminder Nagra). But with the studios’ recent fascination with all things Bollywood, Tinseltown could be just around the corner.

As for Gavron, she too could be poised for big things. While in the states on the press circuit for Brick Lane, Gavron admits that she’s just netted her own Hollywood agent. This connection could be just the thing to pluck a savvy British auteur from obscurity and thrust her and her audacious film pursuits to the forefront of the artistic community.