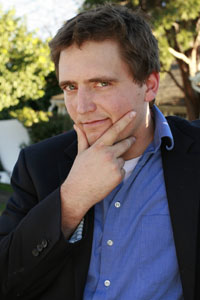 How do you tell a friend he has bad breath? How do you get rid of a one-night stand? How do you wake up your girlfriend for sex?

Owen Benjamin has the answers. The 26-year-old funnyman has created a series of online shorts for C-Spot entitled “Owen Benjamin Presents.” Along with music videos, the show will feature a number of “How To” segments.

“It’s basically ‘How To Be a Scumbag,’” jokes Benjamin. “But in a funny way.”

When it comes to his shows, Benjamin delivers his own brand of humor; he writes, directs, edits and stars in most of his work. He even writes his songs.

“[Stand-up] was just something fun for me,” says Benjamin, “and then someone said they’d pay me to do it – it was a very organic process. Now I don’t know when I’m working.”

Benjamin has also created a show, “Gaytown,” which is also on C-Spot. The show stars Benjamin as a mild-mannered straight guy who, in a town full of intolerant gay people, is trying to be accepted.

Although his work has mostly appeared on the Internet, Benjamin will also appear in House Bunny, a Happy Madison-produced film that’s set to release later this year.